A Pioneer in Women's Sport

In fall 1981, forty-five years after graduation and one year after her retirement as a special needs teacher in Sumter, South Carolina, Helen Johns Carroll ’36 took a sentimental journey to Providence. 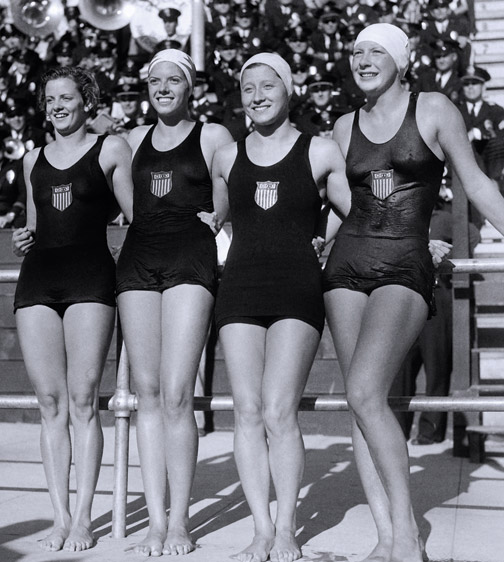 Carroll, who’d won a gold medal at the 1932 Summer Olympic Games in Los Angeles when she swam the second leg on the women’s freestyle relay team, was going to receive Brown’s highest athletic honor: induction into the Brown Sports Hall of Fame. Two of her relatives from Weymouth, Massachusetts, were already members: her uncle, Ken Nash ’12, a major league baseball player and head baseball coach at Tufts University, and a cousin, Tom Nash ’40, a football star who died during World War II after being shot down over Holland.

“Returning to Brown always energized her,” says Carroll’s daughter, Judy Player. “She attended many reunions of the class of 1936, and there were mementos of them in every room of her house. Brown was also a special place because her college roommate, Claire Shea ’36, my father Eugene’s first cousin, introduced her to my father, and they were married in 1937.”

Carroll died in Sumter last July at the age of ninety-nine. At the time she was the second-oldest surviving U.S. Olympic gold medalist. Along with Josephine McKim, Eleanor Garatti-Saville, and Helene Madison, Carroll set what was then a 4x100-meter world record of four minutes and thirty-eight seconds. “To have this medal,” Carroll recalled years later, “to hear the national anthem and see them raise our flag—it was very thrilling. I remember thinking, ‘Oh Heavens! This is almost too much.’ I thought I was going to faint, right there. But I took a deep breath and pushed on.”

She hung photographs of the event in her home, and, whenever she was asked to speak somewhere, Carroll brought along her duplicate gold medal (the original had been stolen) and her black swimsuit with the USA logo on it. At the Olympics she had given her Olympic sweatsuit to a Japanese swimmer in exchange for a kimono, which she wore only briefly before hanging it in her closet for the rest of her life.

A native of Medford, Massachusetts, Carroll was honored by 10,000 cheering hometown fans at a parade in her honor and was invited to the White House along with her Olympic teammates. Although appendicitis sidelined her during her first year at Brown’s Pembroke College, Carroll went on to captain and star on the women’s swimming team. She was unbeaten in the individual freestyle as a collegian.

She also participated in field hockey, track, and intramural baseball and was a member of the student council. “My mother cherished her years at Brown,” Player says, “and she maintained friendships with her classmates until she was in her nineties and had finally outlived them.” Carroll graduated with a dual major in psychology and economics. In 1969 she earned a master’s in special education from the University of South Carolina.

As a child Carroll had been an ocean swimmer, but when her older sister, Evelyn, took a job as a physical education teacher at nearby Brookline High School, she was given access to the pool in the town’s bath house. Her father drove her there three times a week from Medford, and she would pay thirty-five cents to get in. After seeing her in the water, Women’s Swimming Association coach Jim McNamara and Brookline High coach John Coutts predicted she would go far in the sport.

Carroll was the 1932 New England AAU junior 100-yard freestyle champion, and in July of that year she was one of four swimmers chosen for the relay team at the Olympic Trials at Jones Beach in New York City. She later recalled that at the Tenth Olympiad in Los Angeles she saw the glamorous and not so glamorous sides of life: she saw people selling apples in the streets because of the Great Depression, and she attended a party for her and her fellow Olympians hosted by Mary Pickford and Douglas Fairbanks. Johnny Weissmuller, star of the Tarzan movies, practiced with the women’s team.

Before the 1996 Summer Olympics in Atlanta, she was invited by the U.S. Olympic Committee to carry the Olympic torch in downtown Columbia, South Carolina. “She was eighty-one and she did great,” Player says. “She wore white shorts and a special top, and, although it was a hot day, she walked the half-mile. The streets were lined with people. It was so festive.”

Reader Responses to A Pioneer in Women's Sport