There is a moment early in American Catch: The Fight for Our Local Seafood (Penguin) by Paul Greenberg ’90 that perfectly captures the substantial gulf between the abysmal state of America’s traditional fisheries and the author’s seemingly audacious faith that they can be saved. After diving in the murky waters of New York’s Jamaica Bay and not encountering a single live shellfish in what was once the heartland of American oysters, Greenberg finds himself standing on the banks of the Bronx River. Peering into the polluted shallows, he spies a lone Eastern oyster in the mud. 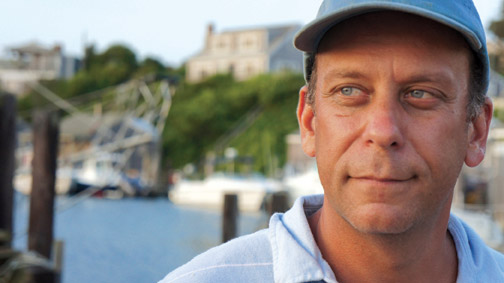 Despite a ban on New York City oysters reaching back to the early twentieth century, when sewage-related outbreaks of cholera and hepatitis killed scores of shellfish consumers, Greenberg removes the briny meat and draws it to his lips. “All reason abandoned,” Greenberg writes, “down the hatch went the New York oyster.”

Greenberg not only lived to tell that leap-of-faith tale but, in this book, a much larger one about how the country can turn the tide on its seafood woes. With American Catch, the follow-up to his 2010 best-seller, Four Fish, Greenberg solidifies his standing as one of the country’s most accomplished and entertaining chroniclers of America’s seafood industry.

Greenberg, a Pew fellow in marine conservation and a fellow with the Blue Oceans Institute, sets out to better understand why the United States, with its historic bounty of marine life and its rich seafaring culture, imports 91 percent of the seafood it consumes, much of it shrimp, salmon, and tilapia raised cheaply and with little regulatory oversight on overseas farms. Meanwhile, a full third of the seafood our nation catches and produces is shipped to foreign countries. With so many fishermen and their home ports reeling from collapsed fish populations and ever-tightening government conservation measures, this is no small irony. Greenberg’s book couldn’t be more timely, or more important, to this industry. 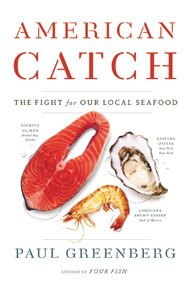 Greenberg, who insists that he doesn’t want all this to read like a “litany of doom,” is perhaps a little too quick to dismiss the serious problems of overfishing and bycatch (fish caught unintentionally and tossed overboard for dead). Ever the optimist, he believes there is a cure to what he calls the “commoditization” of fish. What’s needed, he suggests, is a seafood equivalent of the locavore food movement.

Americans, he says, are still “catching a hell of a lot of fish” that could be more aggressively marketed locally. If consumers learn to appreciate and demand domestic seafood, he believes, a greater investment in and protection of marine habitats will follow. Already, Greenberg has seen a growing trend of fishermen selling their catch directly to buyers as well as more efforts to curb water pollution and restore marshes and shellfish beds.

“There is no more intimate relationship we can have with our environment than to eat from it,” Greenberg writes. “It is, in my opinion, our obligation to reclaim this intimacy and build a bridge from the plate back to the estuary.”