Beneath the bright lights of its annual night game, and before a near-sellout crowd, the Bears lost to Harvard, 22–14, in late September. After Harvard jumped to an early lead but failed at a two-point-conversion, quarterback Marcus Fuller ’15 threw an eighteen-yard touchdown pass to Reiley Higgins ’15, giving Brown a 7–6 lead at halftime. In the third quarter Andrew Coke ’16 rushed into the end zone to cap a ninety-five-yard, nine-play drive, but despite missing an extra-point kick, Harvard scored two touchdowns and a field goal in the second half to ice the win. To honor Brown’s 250th birthday, players wore throwback uaniforms matching those of the  1976 Ivy League Champions. 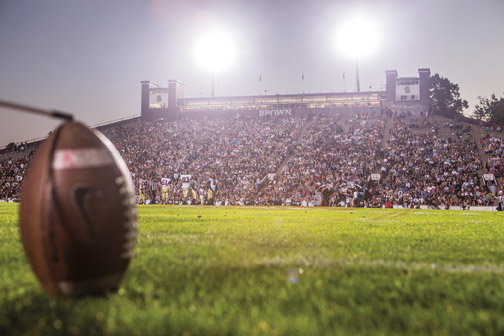