In February 2010, Forrest Broman ’61, CEO of the nonprofit Overseas Schools Assistance Corporation, met with sixty other education experts in Boston to discuss their response to the massive earthquake that had struck Haiti a month earlier. Unfamiliar with Haiti’s educational system, Broman assumed that the tens of thousands of children living in makeshift tent camps would need their schools rebuilt. Instead, he learned that the children would be getting access to classrooms for the first time. “They never went to school before,” says Broman. “They wouldn’t have gone to school without the earthquake.” 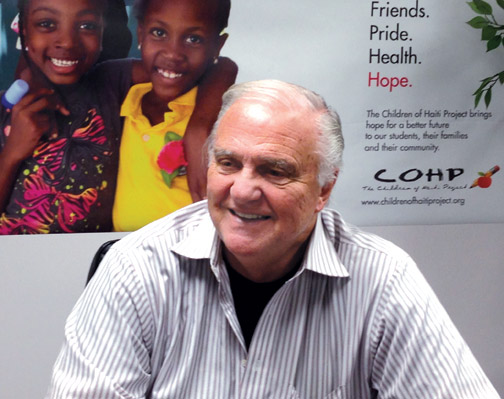 Three months later Broman founded the Children of Haiti Project (COHP). The program, run out of a large, renovated residential home in Port-au-Prince, the country’s capital, instructs and feeds seventy-six children from the third to eighth grades. Students were selected for intellectual potential. The COHP’s staff of nine teachers covers a full curriculum in Creole, French, and English.

The most remarkable characteristic of the COHP is not so much what it does as that it still has the money to do it. Right after the earthquake, with TV news broadcasting images of Haiti’s destroyed National Assembly building and corpses half-buried in rubble, donations from the United States flowed in. The COHP raised $150,000.

But as the earthquake faded from memory, raising cash became much harder, Broman says. In addition to feeling less of a sense of urgency, potential donors were dismayed by the poor execution of prominent relief efforts—including the dysfunctional and now-defunct Interim Haiti Recovery Commission, cochaired by former President Bill Clinton. “Haiti is not a fertile ground for raising money at this stage,” Broman says, “but we’re carrying on.”

An American civilization concentrator at Brown, Broman found that an American history course he took from William McLoughlin during his freshman year gave him a greater appreciation of the suffering that slavery and its legacy have inflicted on African Americans. “That was always a very large issue in my life from Brown,” says Broman. “People who don’t have a break from birth and are deprived of any kind of opportunity.”

After graduating, Broman attended Harvard Law School and worked on Wall Street before entering the public and nonprofit sectors. “I found the practice of law, even in a big Wall Street firm, kind of mundane,” he says. Broman worked for three years in Lyndon B. Johnson’s Office of Economic Opportunity and then joined New York City’s Addiction Services Agency.

He says he realized during his time in government that education was “the only real hope for our poor kids.” When an opportunity arose to become an administrator at an international school in Tel Aviv, Broman became its headmaster from 1974 to 1991. While running the school, Broman created The International Educator (TIE), a newspaper that reports on English-language schools around the world for the children of expats and embassy officials and that helps those organizations with recruitment. Partially through donations from readers, TIE provides $30,000 in aid each year to the Children of Haiti Project, one-sixth of its annual budget. Broman also runs administrator and teacher-training programs out of Cape Cod and Miami. He visits Haiti annually.

The children at the COHP school have moved on from their tent camps, but they now often live with five or ten people to a room in small houses and shacks. Many of them also live farther away from the school, making it more difficult to attend class. One six-year-old student walks an hour each way, yet shows up every day. “It’s amazing that in a place where the kids are deprived of an education,” Broman says, “they’re willing to go to great lengths to get one.”

COHP remains committed to the students for the long term. It will pay for the children to attend high school (since most Haitian high schools are private) and help them get into college. That way, says Broman, “we are at least going to have seventy-six educated kids who hopefully will have a future.”
Find more information about COHP at www.childrenofhaitiproject.org.

Reader Responses to The Educator