Deserving To Be Here

Renata Martin ’14, who earned her Sc.B. in December along with roughly 130 midyear graduates, got one of the highest grades in her driver’s ed class at her high school just outside Newark, New Jersey. When she got home, she excitedly told her parents but didn’t get the response she’d expected. “They told me, ‘No, you’re not going to be able to get your license,’” Martin recalls. 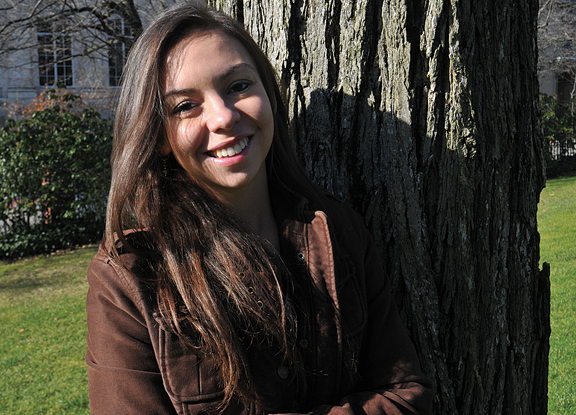 Frank Mullin
Renata Martin'14 once thought she would never be allowed to go to college. In December she graduated from Brown.
Like her parents and two older sisters, Martin was an undocumented immigrant from Brazil, and New Jersey does not allow undocumented immigrants to get driver’s licenses. Martin already knew her family’s immigrant status—though it was a well-kept family secret—but this was the first time she’d been directly affected. She could attend school like any other child in the town of Kearny, and her parents had jobs—her father delivered pizzas, and her mother cleaned houses.

Then Martin got a job at a coffee shop. Lacking a green card, she was fired on her first day. Worst of all for Martin was that even though her parents had entered the United States when she was seven so she and their other children could get a better education, Martin, despite being one of the top students at her high school, was ineligible for federal student aid. College was out of the question.

But she caught some breaks. Essex County College, a community school in Newark, admitted her to its honors program, which meant a full scholarship and no questions asked about her immigration status. There she majored in physical education, hoping to become a personal trainer, a job she figured she could do without a green card.  “I knew I wasn’t going to be able to afford college,” Martin says. “I knew I wouldn’t be able to get a job. I started accepting reality.”

During a meeting with a professor, she confessed that what she really wanted to study was science. He immediately changed her major to biology and encouraged her to go for it. “Having someone believe in me and that I could do that—it was another choice. I was going to do it,” she says. Martin was a top student at Essex, and by the time she graduated, she managed to obtain her green card. She also received a $90,000 Jack Kent Cooke Foundation Undergraduate Transfer Scholarship to continue her education at a four-year college.

Brown was tough at first. She felt she didn’t belong. “It was really hard to know who I was,” she says. She also felt guilty. Her parents continued to toil away at their low-paying jobs while she attended one of the wealthiest colleges in the country.

“I thought, ‘Why can’t my scholarship at Brown apply to everyone in my family?’” Martin says. “I felt I didn’t deserve to be here.” She eventually found her way, though, concentrating in biology and feeling increasingly comfortable at Brown.

Martin plans to work as a research assistant next year in a genomics lab at Massachusetts General Hospital. After that, it will be on to medical school. “You just have to keep believing in yourself despite the obstacles,” she says. “Optimism and determination are extremely important.”

Reader Responses to Deserving To Be Here