To this day, writer Henry Miller remains a mystery to Harry Kiakis ’53. Kiakis, who first got to know Miller in the late 1960s, says that, despite his reputation from such steamy novels as Tropic of Cancer and Tropic of Capricorn—both initially banned in the United States for their explicit sexual content—Miller was actually shy around women. “He was never the aggressor in his romantic relationships,” Kiakis says. “The woman had to make the first move.” 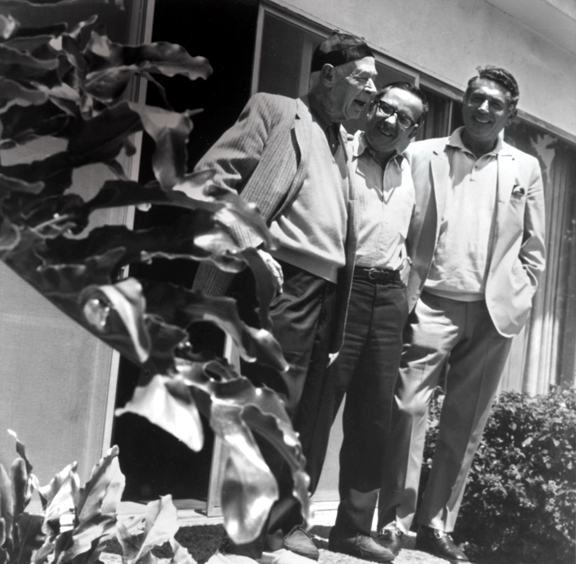 Courtesy Harry Kiakis
From left, Miller, Kiakis, and Grey in May 1969.

Similarly, in his novel The Air-Conditioned Nightmare Miller portrayed the American people as materialistic, immoral, and ignorant. But in person, Kiakis says, Miller would say that America was superior to Europe, which he described as “all intellect and talk, but lacking in spirit.” And Miller was something of a connoisseur of the quintessentially fake sport of professional wrestling. “He thought it was high comedy,” Kiakis says.

Kiakis, who sold intercoms and other communication devices for high-noise environments in southern California, met Miller in 1968 through Miller’s secretary, Gerald Robitaille, a French Canadian author who had previously mailed Kiakis his book. What sprouted was a unique friendship in which Kiakis often visited Miller at his spacious Pacific Palisades home. They would play Ping-Pong in the game room beside Miller’s pool and drink gin and tonics, with Kiakis serving as bartender. They discussed topics ranging from existentialist despair to Hollywood gossip.

Kiakis compares Miller to Proteus, a Greek sea god who changed shapes. “Henry didn’t exactly change his shape,” Kiakis says, “but he was a complex man who had many deep-seated, contradictory impulses.” Kiakis wrote a 400-page diary about his time with Miller, parts of which appeared in Nexus: The International Henry Miller Journal.

Kiakis believes Miller appreciated him because he shared Miller’s fierce independence. “I was always the one who, if the crowd was praising one thing, I would go in the other direction,” he says. The two men also shared an interest in spirituality. Kiakis, who attended Brown after two years in the Army, says his most memorable course on College Hill was on Christian mysticism. Miller, meanwhile, was a “religious seeker,” according to Kiakis. He studied Zen Buddhism and the nineteenth-century Indian mystic Ramakrishna. While house-sitting for Miller in the summer of 1969, when Miller was in Paris watching actor Rip Torn portray him in the film of Tropic of Cancer, Kiakis noticed a copy of Preston Harold’s The Shining Stranger on Miller’s bedside table. A radical reinterpretation of the life of Jesus Christ, “it was heavily marked and underlined,” Kiakis says.

Miller and Kiakis discussed many other books as well. Kiakis says he introduced Miller to British author R. H. Blyth, a scholar who popularized haiku in the West after World War II. Miller often recommended books to Kiakis without having read them himself, saying of Philip Roth’s 1969 novel Portnoy’s Complaint, “You should read it. I heard it was funny.”

This same changeability that made Miller so fascinating to Kiakis also doomed their friendship. In 1969, while he was playing table tennis, Miller suddenly “turns abruptly towards me,” wrote Kiakis in his journalt, “and startles me by saying, ‘Harry, all my life I’ve betrayed every friend I’ve ever had. Why do I do that?’”

A few months later Kiakis sent Miller a letter saying he was disappointed by the film version of Tropic of Cancer: “What a service to humanity, Henry, if you had disappeared into the Himalayas as you once predicted,” Kiakis wrote. Kiakis says he still regrets writing that, but at the time, he didn't give it much thought. Miller was hurt, and relations immediately cooled between the two men.

After two or three months, Kiakis got a call from Miller’s aide. She told him not to come by anymore. He never did.

Reader Responses to A Strange Friendship