On December 15, I joined numerous Rhode Island leaders, including Governor-elect Gina Raimondo and Providence mayor-elect Jorge Elorza, in a special groundbreaking. We were standing on the edge of the Jewelry District, just across the river from College Hill, to celebrate the beginning of a new phase of Brown’s history. 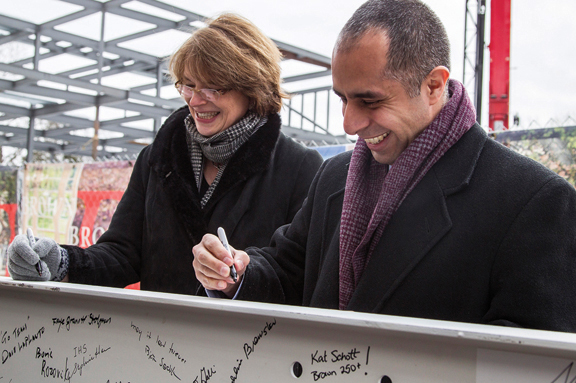 The South Street Landing Project will convert the former South Street Power Station into a new educational facility housing 136,000 square feet of administrative offices for Brown, as well as Rhode Island College’s and University of Rhode Island’s shared Nursing Education Center. South Street Landing will add to the significant space Brown occupies in the Jewelry District, including the Warren Alpert Medical School, research laboratories, and Brown’s School of Professional Studies. A new apartment building designed for graduate and medical school students is also part of this project. Once South Street Landing opens, more than 1,000 members of the Brown community will live, work, teach, conduct research, and learn on the Jewelry District campus.

On February 18, I attended another ceremony—a “beam signing”—to celebrate the construction of a new building for the Department of Applied Mathematics. This building, located on the corner of George Street and Hope Street, is part of a larger project that includes a new state-of the-art laboratory building for the School of Engineering, to be located next to Barus and Holley. This project will permit the planned expansion in the School of Engineering and support its aims to offer innovative undergraduate and graduate education within a world-class research environment.

Although these two projects may seem to be unrelated, they are not. Both stem from the planning principles outlined in Building on Distinction, and both further Brown’s aspiration to be a leading research university that provides the strongest possible education in the liberal arts and sciences.

Building on Distinction lays out a vision in which College Hill remains the heart of education and undergraduate student life. Our planning studies showed very clearly that Brown students use the Open Curriculum to the fullest extent possible: engineering students take courses in literature; musicians study computer science; and economics students study cognitive science. The siting of the new engineering building on College Hill reflects the principle that campus growth should support, rather than hinder, the flow of students across areas of study that occurs so naturally at Brown.

Although College Hill should remain at the heart of student life, our planning studies showed that the Jewelry District offers tremendous opportunities for growth that will benefit the entire university. The site is well-suited to the expansion of master’s and executive education, as well as research activities in applied sciences, including research in translational medicine, brain science, bioengineering, and health informatics and data science, many of which involve undergraduates.

The recent relocation of the highway I-195, which formerly cut through the Jewelry District, will create opportunities for future growth, allowing Brown to deepen its partnerships with Rhode Island hospitals and universities and, we hope, develop new partnerships with private sector companies attracted to the area. The movement of administrative offices to the South Street Landing will open up room on College Hill for academic initiatives, giving us leeway to give cramped departments additional space, and move departments and programs to new locations that strengthen Brown’s strong culture of interdisciplinary collaboration in the humanities, social sciences and sciences.

In the future, I see College Hill and the Jewelry District as two interconnected hubs of education and research. A new pedestrian bridge over the Providence River will join these downtown spaces and the historic College Hill campus. This bridge has both practical and symbolic significance. It will make the short walk from College Hill to the Jewelry District even shorter (although, yes, shuttle buses will also be available), and it will signify the growing strength of the connections between Brown University and our city and state.