If you listen to podcasts, you likely got hooked on Serial, the investigative series from the folks at This American Life that got a lot of listeners downloading last year. 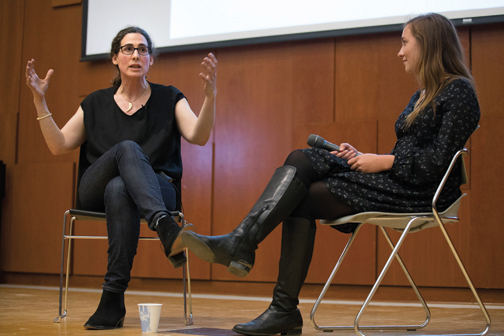 In late March, Serial’s host and journalist, Sarah Koenig, was on campus to talk about the podcast’s success. (Her talk, organized by the Sarah Doyle Women’s Center and the Swearer Center, was part of Women’s History Month.) Koenig, a producer at This American Life when she began working on the podcast, said the effort was launched with modest expectations.

“We thought if we could get an audience of 300,000 people,” she said, “that would be a really good target for us and allow us to continue into a second season.”

Serial reached that target within five days of its October 2014 launch. Since then, the podcast has averaged an unprecedented 6.5 million listeners per episode—compared to 2 million for an episode of This American Life, Koenig said. Serial takes a second look at the 1999 murder case of Baltimore teenager Hae Min Lee, which resulted in the conviction of her former boyfriend Adnan Syed, who claims he is innocent.

Over twelve episodes, Koenig delves deeply into evidence from the case, scrutinizing cell phone call logs and interviewing key witnesses. Along the way, she takes readers along the process of making sense of what she is finding. “The outcome of my reporting I don’t see as extraordinary,” Koenig said. “So why did Serial come to feel like something new?”

Presentation was key. Koenig said she initially wanted the podcast to feel like a good book on tape, but her This American Life colleagues, including Ira Glass ’82, nixed that idea. “They told me, ‘Don’t ever say that out loud again,’” Koenig said. Instead, Serial is structured like a television show, with a theme song and a “previously on” recap at the beginning of each episode.

The part of listeners’ brains that lights up when listening to Serial, Koenig says, is the same part activated while watching such television fare as Breaking Bad or House of Cards. “We’re used to having this feeling from escapist entertainment,” Koenig said, “and this was real. It was journalism. So, suddenly it felt like this new thing.”

Koenig spent forty-two hours on the phone with Syed while reporting the podcast. At her talk, she played several clips of their conversations, some serious and some playful, that never made it onto the podcast.

“Uncomfortable as it is to admit it,” she confessed, “sometimes there’s a little flirting going on. This relationship is not purely professional, but it does not qualify as a friendship. It pretends to be straightforward, but there are fissures of distrust all over it. And it changes all the time. It’s still changing.”

Sage Fanucchi-Funes ’17, a coordinator of the event, conducted a question-and-answer session with Koenig after her talk. Her advice to aspiring journalists? “It’s a perfectly fine thing to be bad at your job until you get good at your job.”

Reader Responses to A Messy Narrative