The Modern Mercenary: Private Armies and What They Mean for World Order by Sean McFate ’92 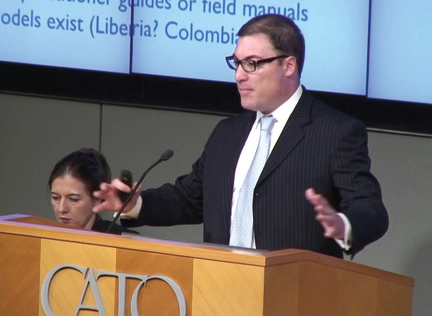 CATO Institute
A new book by Sean McFate '92 examines how the rise
in private armies has changed the nature of warfare.

During the course of our still-young century, the nature of warfare has changed in a dramatic and disturbing way. Private companies have taken over much of the work that armies used to do. This challenges the age-old assumption that states have, and should have, a monopoly on the use of force.

Sean McFate ’92 has produced an insightful guide to this phenomenon, The Modern Mercenary: Private Armies and What They Mean for World Order. He concludes that they mean a great deal. “Over the past centuries, rulers first encouraged, then delegitimized, and finally all but eliminated mercenarism,” McFate writes. “Now it is returning.”
During World War II, according to McFate, private contractors were responsible for about 10 percent of the American war effort. In Iraq and Afghanistan the figure is 50 percent. Other countries use private military contractors as well; they are big business in Russia, France, and China, for example. Some of these companies, especially those run by Americans, have headquarters in Dubai to escape inconvenient scrutiny at home. All are, McFate writes, “motivated more by profit than by politics.”

“Contract warfare is literally a free market for force, where private armies and clients seek each other out, negotiate prices, and wage wars for personal gain,” he reports. “Already the U.S. military is highly privatized, with contractors making up half of its force structure in theaters of war, and, short of a national draft, the country can no longer fight a sustained war without private sector involvement.”

The Modern Mercenary considers the problems that come with this new paradigm. Private armies often operate without meaningful oversight, fight with little knowledge of the countries where they are deployed, and are skilled at evading arms embargoes. Often they seek to “prolong and expand war for financial gain.” Governments favor them because they “make it easier and subsequently more tempting to go to war.”

“Hiring contractors in domestically unpopular wars also allows the government to dodge national political debate over whether the wars should end, since few Americans care about contractor casualties,” McFate concludes. “Similarly, when a policy is politically too risky, outsourcing it to the private sector offers employers a plausible deniability in the event of failure.”

Recognizing that armies-for-hire are likely to become steadily more important, McFate suggests ways they could be controlled or regulated. “The private military industry is not going away, and therefore actions should be taken to harness the good while limiting the bad effects it produces,” he writes. “If managed well, such a system would prove a boon to global security.”

McFate warns against onerous regulation from Washington because that could result in driving more security contractors offshore. It might not even be in Washington’s interest, since a loosely regulated army can wreak more havoc on the battlefield than one governed by such bothersome niceties as the Uniform Code of Military Justice. Instead, McFate proposes a “licensing and registration regime” run by the United Nations. The UN, however, is chronically weak, and, as McFate makes chillingly clear, the mercenary industry is now a center of growing world power.

Stephen Kinzer is journalist in residence at the Watson Institute.