“Asia’s rise is the opportunity of the century,” declared former Australian prime minister  Julia Gillard at the start of the ninetieth Stephen A. Ogden Jr. ’60 Memorial Lecture on International Affairs in March. What is striking, Gillard said, is the speed of Asia’s development. She noted that while nineteenth-century Britain required seventy years to quadruple its economy, China’s economy has grown twenty-fold in the last twenty-five years. “This is industrialization at warp speed,” she said. 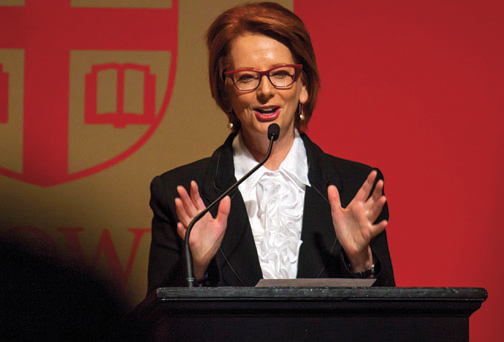 China is not alone—Indonesia, Vietnam, Cambodia, India, Singapore, South Korea, and Japan are also experiencing new growth, Gillard noted. “These rapid changes across Asia mean than in a few years’ time [the Eastern Pacific] will be home to the most sizeable middle class on the planet,” she said. “Bigger than the rest of the middle classes of the world combined, North America and Europe included.”

A larger middle class in Asia creates a growing market for Australian exports such as health care, post-secondary education, and innovations in science and medicine, Gillard said. Each year, she observed, the world shifts further away from the unipolar structure of the late 1900s and into what she termed the “Asian Century.”