Thinking with Your Heart

It was supposed to be a festive trip. But on December 16, while Zainab Syed ’14 was in her home country of Pakistan to celebrate her parents’ anniversary, “Pakistan’s 9/11” occurred when Taliban fighters attacked a military school in Peshawar, killing 145 people, most of them students. 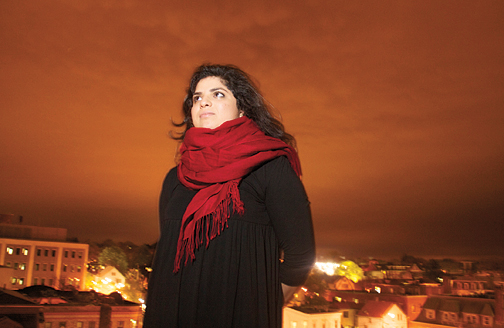 Stunned, but also eager to help, Syed canceled her return flight. “I couldn’t sit still. I couldn’t do nothing,” says Syed, who lived in Pakistan until she was twelve years old. She got in contact with Ministry of Change (MC), a new nongovernmental organization that serves as an online information exchange for agencies running development projects in the country and for individuals looking to help.

Syed and her colleagues at MC soon found that hospitals kept limited records on the number of victims and their families after the Peshawar tragedy. Syed, a political science concentrator, wanted to help with mental health issues, but she found the lack of data made it difficult for psychologists in the country to offer follow-up care. She spent several weeks shuttling between Peshawar and cities like Islamabad and Karachi to compile a more accurate database of victims and to set up crisis plans for future catastrophes. It was dangerous work for a woman traveling alone in Peshawar. “Pakistan is very unsafe for me, but it’s also my home,” she says. “I just go where my gut goes.”

Syed set up programs offering art therapy and counseling for students and their families looking to deal with their grief. This was no easy task, as talking about mental health is considered taboo in the region. Syed and MC set up a campaign of therapeutic animated videos “to show people that they needed help,” Syed says, “because it’s not a part of the culture. They’re very resilient, but a lot of children are suffering, and they don’t know it.”

Because her father worked in the oil and mining industry, Syed moved around a lot as a kid. In addition to the United States, she spent time in Romania and Yemen and attended boarding school in Wales. “I’ve always thought of myself as someone who connects cultures,” she says. At Brown, Syed was a member of the spoken-word group Word! and crafted poems that focused on Pakistan, especially the tumult around its partition from India in 1947.

Syed spent the autumn after graduation touring the United States with another spoken-word artist, performing her poems on stage. She expected to spend the next year finishing a manuscript in Australia, where her parents now live, but in January, while working with MC, she found herself reciting her poetry in Lahore, the city of her childhood.

Ministry of Change is not yet in full swing. Repairing Peshawar pushed the group into action earlier than planned. But once it’s totally launched, MC will be a social website for professionals and volunteers working all over Pakistan. Users can coordinate projects, share firsthand reports about conditions on the ground, and sign up to volunteer. “Our role was to become sort of the electrical wiring bringing information to everyone,” Syed says. “The idea isn’t to start another institution but to strengthen existing institutions.”

Syed and Sarah Friedland ’14 are developing an art installation and commemorative show about Peshawar that they would like to exhibit at Brown, among other places across the country. “I’m a bit of a dreamer,” Syed says. “People call it naïve—‘You’re not building your career!’ But I don’t usually think with my head. I think with my heart.”

Reader Responses to Thinking with Your Heart