This year's honorary degree recipients included education innovators, an astronaut, and a scientist who helped save the ozone. 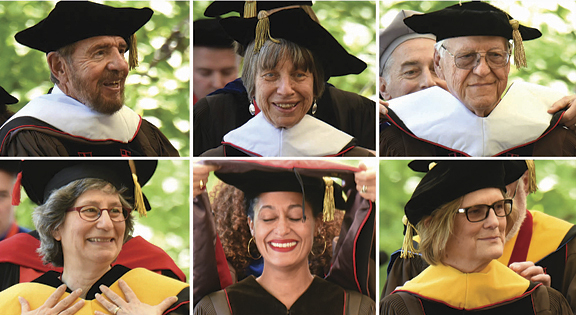 Corrigan, a former chancellor of University of Massachusetts–Boston, was president of San Francisco State University for twenty-four years before retiring in 2012. He started one of the nation’s earliest black studies programs at the University of Iowa, where he worked as an associate professor of English and American civilization during the 1960s. With a 1969 National Endowment for the Humanities/Ford Foundation grant, he began a series of summer institutes on the culture of black America, focusing in particular on the Harlem Renaissance, Richard Wright, W.E.B. Du Bois, and black women in America. At San Francisco State, he was known for diversifying the faculty and student body. According to the San Francisco Gate, he raised academic prestige, expanded the campus by 50 percent to 142 acres, and increased donations from $1.9 million to $16 million in today’s dollars.

A distinguished professor emerita of anthropology at the University of New Mexico, Lamphere will always be remembered at Brown for launching a landmark discrimination suit against the University in 1975. Claiming she was denied tenure because of her gender, Lamphere accepted an out-of-court settlement that included a commitment to hiring and promoting more female faculty members. The suit was vacated in 1992 by mutual consent after the Brown faculty included five times more women than in the 1970s. Lamphere pioneered women and gender studies in the field of anthropology and specialized in family and kinship among the Navajo. Her books include From Working Daughters to Working Mothers (1987), Sunbelt Working Mothers: Reconciling Family and Factory (1993), and Weaving Women’s Lives: Three Generations in a Navajo Family (2007).

A former president and CEO of IBM Europe, McKinney first joined the company in 1956 as a sales representative after graduating from the University of Tennessee. In 1999 he became president of the Metropolitan Museum of Art in New York City, where he led the museum’s non-curatorial business. As a longtime Brown Corporation member, McKinney has played a major role in shaping Brown. He joined the Corporation in 1990 as a trustee and eight years later was elected to an eleven-year term on the Board of Fellows. He has also been a strong supporter of the Watson Institute as a member and former chair of its Board of Overseers.

An accomplished and award-winning actor, producer, and television host, Ross played Joan Clayton in the sitcom Girlfriends and is now Dr. Rainbow Johnson in the acclaimed comedy black-ish. She has appeared in eleven films, beginning with the independent feature Far Harbor in 1996. She has won the NAACP’s Image Award for Outstanding Actress in a Comedy Series four times and received a BET Comedy Award for Girlfriends in 2004. Ross also conducts motivational workshops and mentors teenage girls through Aviva Family and Children Services in Los Angeles and with Big Brothers Big Sisters.

Solomon is the Ellen Swallow Richards Professor of Atmospheric Chemistry and Climate Science at the Massachusetts Institute of Technology, where she is a founding director of the Environmental Solutions Initiative. Her research presented the first explanation for the ozone holes in the Antarctic: that chlorofluorocarbons were reacting with ozone on the surface of ice particles in high-altitude clouds. As a result, under the Montreal Protocol the manufacture of chlorofluorocarbons is being phased out. Before arriving at MIT in 2012, she worked for three decades as a scientist with the National Oceanic and Atmospheric Administration. In her book The Coldest March: Scott’s Fatal Antarctic Expedition, she used modern meteorological knowledge to understand why Robert Scott’s 1912 expedition to the South Pole ended in failure. In 1999, she received the U.S. National Medal of Science. An Antarctic glacier and an Antarctic snow saddle are both named for her.

One of the first six women in the NASA astronaut corps, Sullivan logged 532 hours in space and in 1984 became the first American woman to walk there. She flew on three space shuttle missions, including the 1990 Discovery mission that launched the Hubble telescope. After retiring as an astronaut, Sullivan worked as president and CEO of the Center of Science and Industry in Columbus, Ohio, and became the inaugural director of the Battelle Center for Mathematics and Science Education Policy in Ohio’s State’s John Glenn School of Public Affairs. In 1993 she became chief scientist at the National Oceanic and Atmospheric Administration, where she now works as acting administrator. In 2014, the U.S. Senate confirmed Sullivan as the Under Secretary of Commerce for Oceans and Atmosphere.