Andrew Renzi ’07 was perfectly calm walking the red carpet in April for the debut of his first feature, Franny, at the Tribeca Film Festival in New York City. The writer-director is a festival veteran: Fishtail, his documentary about Montana cattle ranchers, premiered at Tribeca last year, and in 2012 and 2013 he kicked off the two shorts Karaoke! and The Fort at the Sundance festival. But the reason Renzi was so relaxed in April is that he was standing next to Franny’s leading man, Richard Gere, who absorbed most of the attention. “You stand there completely comfortable in your own skin,” Renzi laughs, “because you know everyone’s looking at him.” 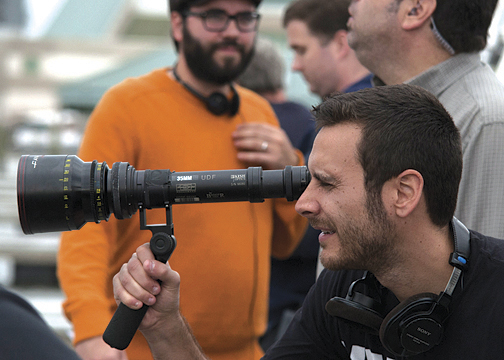 Washington Square Films
Writer/director Andrew Renzi '07 on the set of Franny.
Confidence was key while shooting Franny, which stars Gere as a wealthy, drug-addicted eccentric who tries to make up for the past by thrusting himself into the lives of a newlywed couple, played by Dakota Fanning and Divergent’s Theo James. Although an indie drama, Franny was bigger than anything Renzi had done before, especially since he was directing a well-known, well-established cast taking on unfamiliar, challenging roles. “It was definitely a learning curve,” he says.

It helped, he adds, that he connected with Gere, who met with him about a half-dozen times before committing to showcase a different kind of character. “We were both coming at it from a fresh place,” Renzi says. The collaboration paid off. Variety called the film a “surprising and graceful first fiction feature” for Renzi and noted that Gere’s performance was a “flamboyant turn” for the veteran actor. After its Tribeca launch, Samuel Goldwyn Films acquired U.S. distribution rights.

The script for Franny was inspired by real-life loss. During Renzi’s junior year at Brown, where he studied literary arts, his father, Frank, was diagnosed with cancer, and he left to spend time with his dad before he died. Despite a brief return to campus, Renzi did not graduate.

“After his death, I remember going through a real transition,” he recalls, “dealing with a lot of conflicting feelings. I guess writing the film became cathartic, even though the plot was pure fiction.”

A Philadelphia native who now lives in Brooklyn with his fiancée, Katie McClain ’07, Renzi got his film industry break in 2006, when, desperate for a job, he knocked on the door of director Wes Anderson’s New York City home. The gutsy move landed him an internship whose duties included making mango shakes for Anderson. But he did get to observe the Oscar-nominated filmmaker at work. “I didn’t have the backbone to say, ‘I’m going to go make movies now,’” Renzi says. “So it kind of lifted the veil and made it feel like it was possible.” After that, he produced such low-budget films as 2010’s Sympathy for Delicious—actor Mark Ruffalo’s directorial debut—before shifting to writing and directing.

Renzi’s next screenplay is about a paralyzed convict and his relationship with the prison’s physical therapist. To him, a rich, compelling tale is the cornerstone of any great movie. “Being at Brown made me love stories,” he says, “and that was a lot more important than going to film school.”