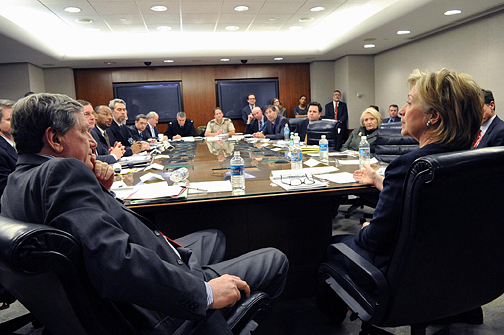 Courtesy HBO
Richard Holbrook with Hilary Clinton while she was Secratary of State.

During his nearly fifty-year career helping shape U.S. foreign policy, Richard Holbrooke ’62 was, among other things, a foreign service officer in Vietnam, ambassador to Germany, assistant secretary of state for Europe (and the youngest assistant secretary of state in U.S. history), U.S. ambassador to the United Nations, and special representative for Afghanistan and Pakistan. He spent time in more than 180 countries. His friend Leslie Gelb, now the president emeritus of the Council on Foreign Relations, says Holbrooke was “the diplomatic hope for my generation.” Hillary Clinton notes that Holbrooke “wanted to be a great man so he could change history. He was and he did.”

Gelb makes this observation in The Diplomat, a documentary by Holbrooke’s son David that will air this fall on HBO. (One of its executive producers is Marshall Sonenshine ’82.) The film is a detailed accounting of Holbrooke’s career that uses an absorbing selection of stills and film clips to present a revealing insider look at the drama of diplomacy—at least the kind for which the hard-charging Holbrooke was known. Among the Holbrooke admirers who sit for interviews in The Diplomat are Bill Clinton, Hillary Clinton, John Kerry, Al Gore, Madeleine Albright, Wesley Clark, Samantha Power, and David Petraeus, as well as the journalists Joe Klein, Dexter Filkins, George Packer, Roger Cohen, Stanley Karnow, Christiane Amanpour, David Rohde ’90, and Bob Woodward.

Holbrooke’s reputation is largely based on his brokering of the 1995 Dayton Accords, which brought to an end the war and genocide in Bosnia and Herzegovina. In The Diplomat, one observer describes Holbrooke’s role as “the grinding work of being the action officer to stop a war that was brutal.” The primary obstacle to peace in the region was Serbian president Slobodan Milosevic, a nationalistic bully whom no one dared cross. In Holbrooke, who is variously described in The Diplomat as a bulldozer, a loose cannon, an irritant, and a stepper on toes, Milosevic met his match.

Thanks to Holbrooke, the Dayton Accords were the last great example of the efficacy of a strong diplomatic approach backed by sure military action. Holbrooke always believed in a foreign policy where diplomacy leads and the military follows. If his outsized personality prevented him from ever becoming secretary of state, his faith in diplomacy increasingly placed him out of step with the dominant U.S. approach since 9/11: The pledge that our country does not talk to terrorists has turned much of our foreign policy into military action or the threat of it. (The recent nuclear deal with Iran is in part a test case for restoring the role of diplomacy in U.S. foreign policy.)

The Diplomat displays rich depth as a conventional documentary. As Richard Holbrooke’s son, David Holbrooke earned the trust not only of an all-star group but of Holbrooke’s former aides and adversaries. The film’s ambition doesn’t stop there, however. Interwoven with the ambassadorial profile is a more intimate look at the man and his shortcomings as father and husband. At the beginning of The Diplomat, David Holbrooke makes the startling claim that only after Richard Holbrooke’s death did he realize his father was a historical figure.

When Richard Holbrooke’s first wife, Larrine Sullivan Holbrooke ’63 (they met on a blind date at Brown), is asked to characterize her husband, she replies, “absent a lot.” When Richard Holbrooke was home, according to his son, he didn’t like to talk about work. “He could be an intense and complicated man,” David Holbrooke says, “often making our relationship challenging.” His brother Anthony tells him, “He never considered it worth his time to tell me—just me, just me—a story when he could tell that story to a wider audience.” The Diplomat is David Holbrooke’s attempt at getting to know his father “better in death than in life.”

Despite these sacrifices, the Richard Holbrooke of this documentary makes a powerful case for shrewd and forceful diplomacy backed up by military force. As Bill Clinton says of Holbrooke, “In the end what matters is there are a lot of people walking around on the face of the earth these days—or their children or their grandchildren—because of the way he lived his life.”