When Manuel Contreras ’16 arrived at Brown, he could immediately tell he was different. Others were moving into their dorms with the help of parents and siblings, while he moved in by himself. His father, a gardener, and his mother, a hospital cleaning woman, couldn’t afford to fly to Providence from San Diego, where the family lived. 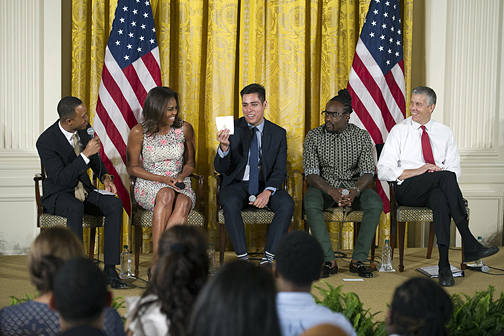 AP/White House
In July, Contreras shared his insights as a first generation student at a White House panel alongside Michelle Obama.

Last year, Contreras, along with classmates Jessica Brown and Stanley Stewart, set out to create a support network for students who, like them, are the first in their families to attend college. Called 1vyG, it has grown to include seven other Ivy League universities—Columbia, Cornell, Dartmouth, Harvard, Princeton, the University of Pennsylvania, and Yale.

This July, Contreras was invited to the White House as part of Michelle Obama’s Reach Higher initiative. Before an audience of about 130 college-bound students—all of whom overcame challenges ranging from homelessness to special needs—Contreras spoke on a panel alongside Obama, U.S. Secretary of Education Arne Duncan, and the musical artist Wale about his experiences as as first-generation student at an Ivy League school.

Roughly 17 percent of Brown students now fit into this first-generation category, and their time on College Hill can be excruciatingly difficult. They often experience culture clash, arrive less prepared academically, and find themselves increasingly distanced from family members who have no idea what life at an Ivy League college is like.

Contreras says that when he arrived at Brown, he found it overwhelming. “It looked like Hogwarts,” he says. “It was so magical.”

When his classmates discussed their favorite novels, he realized he hadn’t read them, so he made a sarcastic joke about liking Harry Potter to throw them off the track. Another secret he kept: he’d bought his winter coat at a thrift store.

In his junior year, Contreras fell into a funk, convinced he didn’t belong at Brown. It wasn’t until spring semester that a chance encounter with another first-generation student put him on a new track. When they struck up a conversation, they found their difficulties at Brown were similar, and the student assured Contreras that he belonged at Brown. “He validated the crap out of me,” he says. Contreras then realized how important a social network was for students like himself.

Contreras, a C.V. Starr Social Entrepreneurship Fellow, says it’s one thing for Brown to be proud of the fact that it’s becoming more accessible to first-generation college students, but another to provide enough support to meet their challenges. “As the students become more diverse,” he asks, “how does it change to support its students?”

1vyG organized a three-day conference at Brown last winter that brought together more than 250 first-generation students and dozens of administrators to organize around the issues they face.
This year, 1vyG will start a mentoring program to link first-generation students with other students and alumni of similar backgrounds, and a second conference will be held next February at Harvard. Brown administrators are also beefing up their support for the students.

Contreras points out that not all first-generation students come from low-income households, but he believes their experiences are still similar. The students don’t feel as if they belong or deserve to be at a place like Brown. They come from schools that haven’t prepared them to write complex research papers or to perform advanced science and mathematics. They often have less parental support.

“My parents didn’t just not know what college was,” says Contreras, whose mother and father came from Mexico. “They didn’t even know what questions to ask about it.”