Should Medicaid cover the full cost of new and better medications, even for people who are sick because they share needles during illegal drug use? 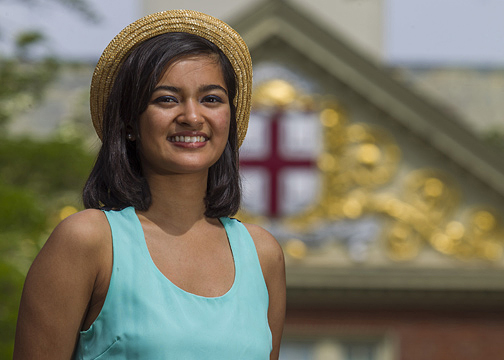 Mike Cohea
"Pre-existing conditions and previous substance abuse," says Soumitri Barua '17, "should not restrict a patient from a life-saving drug."

“Pre-existing conditions and previous substance use,” says Soumitri Barua ’17, “should not restrict a patient from a life-saving drug.”

Last year, Barua ’17, along with Assistant Professor of Medicine Lynn Taylor, looked at the policy of forty-two state Medicaid programs on paying for treatment with a new medication called sofosbuvir (Sovaldi). In 2013, sofosbuvir, when combined with other drugs, was found to cure certain strains of hepatitis C (HCV) in more than 90 percent of patients. HCV, which is spread by infected blood and is prevalent among drug users who share needles, afflicts three million Americans and can lead to cirrhosis, liver failure, and liver cancer. About 19,000 Americans die from HCV every year, making it a bigger killer than AIDS.

The problem is that a typical twelve-week regimen of sofosbuvir costs an average of $1,000 per pill, or almost $90,000 for the average patient. Because many of HPC’s victims are poor and may also be infected with HIV, they depend on Medicaid to cover the cost. Faced with this enormous price tag, Medicaid officials around the country argue that covering sofosbuvir would devastate their budgets.
In response, most imposed restrictions. People could be ineligible for sofosbuvir if they used alcohol or drugs or were in advanced stages of liver disease. Those with both HIV and HCV—a common combination—couldn’t get the medication unless they also took drugs to treat their HIV.

Because similar conditions aren’t applied for expensive cancer or heart disease treatments, Barua believes this is unjust. It also may be illegal. According to Barua, who is the lead author of the report published in the Annals of Internal Medicine, federal government regulations require states to cover all FDA-approved drugs consistent with their labelling.

“In our analysis,” says Taylor, who is director of the Miriam Hospital’s HIV/Viral Hepatitis Coinfection Program, “we found that most states with known sofosbuvir Medicaid reimbursement requirements impose undue restrictions on eligible recipients.”

Barua says she hopes the study will push states to cover sofosbuvir.