The stand-up career of Jordan Carlos ’01 began one summer night in 1998 with a dare. That was when friends challenged him to jump onstage at Stand Up NY, a Manhattan comedy club where such legends as Jerry Seinfeld and Chris Rock got their start. Carlos can’t recall a single joke he told that evening, but he vividly remembers the crowd’s belly laughs. “It will be burned into my brain forever,” he says. “I had a total stage high.” 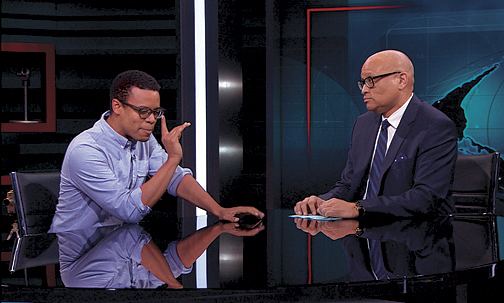 Comedy Central
Jordan Carlos '01, left, dishes it up with TV host Larry Wilmore.
Since then, Brooklyn-based Carlos has become a regular on the comedy circuit, and is now having a breakthrough moment with a string of major gigs. He’s become a writer for Comedy Central’s The Nightly Show with Larry Wilmore, where he offers his own spin on current events and pop culture. Beginning in September, he appears in two independent films: Sleeping with Other People, a romantic comedy with Jason Sudeikis, and the transgender drama Three Generations, in which he costars with Elle Fanning, Naomi Watts, and Susan Sarandon. (Even before its release, Three Generations is generating buzz as a potential awards contender.) Carlos has also been cast in Search Party, a TV pilot with Arrested Development’s Alia Shawkat. “In less than a year,” he says, “I’m doing scenes with her and scenes with Naomi Watts. I’m like, ‘How is this happening?’”

Carlos learned the power of a wisecrack while growing up in Dallas, where he sometimes felt like an outsider in his mostly white neighborhood. “I was very much the token black guy,” he says. “My survival mechanism was just making a joke out of everything so I would be accepted.” He joined an improv group at Brown, but had never performed solo before his effort at Stand Up NY. That experience got him hooked.

So, after graduation, Carlos moonlighted as a comic while working as a copywriter for a prominent New York City advertising firm. He finally quit his day job in 2005 after landing a recurring role on The Colbert Report as Stephen Colbert’s “black friend Alan,” who popped up whenever the host wanted to discuss racial issues. A number of roles followed, from the short-lived MTV series I Just Want My Pants Back to recent guest spots on Broad City and Girls, but Carlos admits that he was constantly having to hustle for work. “It made for a very topsy-turvy existence,” he says. “It was great, but very unstable.”

He’d long aspired to write for a late-night show, but had almost given up after multiple rejections over the years. When he heard about Wilmore’s new program, he decided to give it one more shot. This time he got more aggressive and approached executive producer Rory Albanese on a comedy writing panel.

“I basically stalked him,” Carlos jokes. The move led to an interview with Wilmore, whom Carlos now considers a mentor. “He believes in me,” Carlos says. “To have someone day after day, week after week, say, ‘How can we get the maximum out of this guy?’ That’s been amazing.”
What do you think?
See what other readers are saying about this article and add your voice.

Reader Responses to Joking for Acceptance