At 3 a.m. on July 15, 2004, Andrea Razzaghi stood with a team of NASA scientists and engineers at Vandenberg Air Force Base along the central California coast trying to launch a rocket. This was their third attempt at getting the spacecraft off the ground. 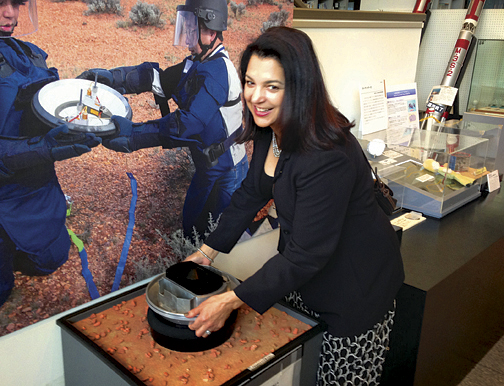 The launch attempt was part of NASA’s Aura mission, whose purpose is to better understand the earth’s atmosphere, particularly its chemistry and dynamics, so that scientists can learn more about such processes as climate change. The mission had consumed Razzaghi’s work life for seven years while she served as the observatory manager in charge of the spacecraft's construction. Now Razzaghi had joined her colleagues for the three-minute window in which all the conditions were right to launch the Aura rocket.

This time, the spacecraft lifted off and shot into an orbit about 430 miles above the earth, ending her role on the mission. Her job, Razzaghi says is to “launch ’em and leave ’em.” Once a satellite is in orbit, she hands over the mission to the specialist scientists and engineers. “You run outside and see this ball of elliptical fire coming up over the hill,” Razzaghi recalls, “and my very first feeling is that we can’t touch it anymore. It was an amazing feeling. To think about losing that mission in a second after seven years of my life would have been very traumatic.” Three years ago Razzaghi became NASA’s deputy director of astrophysics, managing a portfolio of seven missions under development and ten that are fully operational, including the Hubble telescope and the Kepler telescope, which searches for Earth-sized planets across the Milky Way.

“I have a curious mind,” Razzaghi says, “and I like to ask why and to explore. The other part of my nature is that I like to get things done. The whole process of taking something from an idea to productively doing it is an inclination that I get a lot of satisfaction from.”

A mechanical engineering concentrator at Brown, she had already been a longtime tinkerer. When she was a young girl, her parents bought a fixer-upper in Washington, D.C., and her father, a dentist and handyman around his home, encouraged Razzaghi to try out his power tools. Despite his safety instructions, she suffered some burns and as a third-grader caused a small explosion trying to replicate a school science experiment.

As a woman and a woman of color, Razzaghi stood out among her engineering classmates and her NASA colleagues at first. It could be isolating. Male students sometimes worked together but hardly ever included her, and her first engineering group at NASA was so male-dominated that signs on the lab’s restrooms read MEN and WOMAN.

“I don’t feel like I had knee-jerk reactions to that,” she says. “Ignorance was bliss. I didn’t know I was going to be the only girl so I wasn’t anticipating that.”

Razzaghi has now worked at NASA for 30 years. In 1996–97 she was called in to work as a senior policy analyst at the Clinton White House Office of Science and Technology Policy. She worked on such issues as Gulf War syndrome, infectious disease, and the Y2K computer bug. “I really got to see how the whole system works,” she says. “It really gave me a wonderful perspective coming back to [NASA] understanding why some missions get supported and some get canceled.”

In her spare time, Razzaghi teaches belly dancing and has earned a brown belt in karate. But she loves her work at NASA, where long ago she earned the respect of her colleagues, no matter their gender or race. “I have some stories,” she says, “but I feel like I had support all the way.”
What do you think?
See what other readers are saying about this article and add your voice.