Passion for Figuring Things Out

Long before chemist Michael Hoffmann ’74 PhD was a teacher, he was a tinkerer. He remembers being a young boy in Wisconsin, waiting to see what kind of interesting materials his father, a food products distributor, would bring home from his trips. The coolest stuff was combustible. 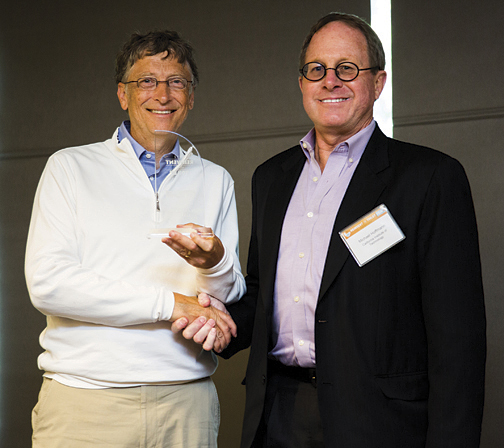 “When I was in the second or third grade,” Hoffmann recalls, “he brought a Gilbert chemistry set home for me—one of those kits from the fifties that kids got to play around with. I think parents probably wouldn’t allow that now, for the most part.”

Not only did Hoffmann and his fingers survive the potions and powders inside the chemistry set, but a romance with homemade rocketry grew out of his experiments. When he wasn’t running off to the library to research potentially explosive chemicals—another pursuit today’s parents aren’t likely to encourage—he was stealing looks at a cache of chemical engineering journals that belonged to a family member. “I was so intrigued by colors and reactions and different possibilities,” he says.

Clearly, Hoffmann never stopped being entranced by possibility. One of his latest projects, a sustainable, energy-generating toilet, has groundbreaking implications for helping solve shortages of water and energy. In 2012, along with a team of his students, Hoffmann, the James Irvine Professor of Environmental Science at the California Institute of Technology, developed the device as the winning entry in a contest funded by the Bill and Melinda Gates Foundation. The inspiration came from Hoffmann’s considerable experience with nanotechnology, including the purification system he designed for NASA, which allows astronauts to drink water made from their own urine. The toilet works by applying photovoltaic electrochemistry to treat wastewater, recycling the water itself and producing hydrogen—energy—from the human waste.

Over the past three years, the team has continued to refine the prototypes to include computerized controls. With the Kohler Company, they now have working toilets installed in India and will soon have some in China and South Africa. The project has also garnered support from the Vodafone Foundation, and Gates is offering continued support through a joint manufacturing venture in China.

For someone transfixed by science from an early age, the rewards of such work could easily be theoretical. But Hoffmann says the environmental applications of this kind of technology have always been his primary motivation. A lifelong athlete who earned his undergraduate degree at Northwestern on a track-and-field scholarship, he says that “being exposed to lung-blistering smog” as a postdoctoral scholar in California made him want to “understand chemical transformations, limitations, and how to control [the problems that lead to pollution].”

He says he also has vivid memories of Lake Michigan pollution. “There would sometimes be maybe a foot deep of dead fish a foot deep along the shores, all due to ecological and chemical changes,” he says. “I’m passionate about trying to understand the chemistry underlying them.”

Like the vials of his chemistry set, all these things—his interests, his hometowns, perhaps even the tenor of campus life in 1968 when he arrived at Brown for grad school—provided a perfect crucible for Hoffmann’s development as a scientist, teacher, and global citizen. And, like many chemical reactions, this work is not just worthy of our attention—it demands it.
What do you think?
See what other readers are saying about this article and add your voice.

Reader Responses to Passion for Figuring Things Out