For years, whenever people heard about Amanda Walsh’s choice of legal specialty—Title IX, the statute that bans discrimination on the basis of sex at any school receiving federal funds—they reacted with puzzlement. 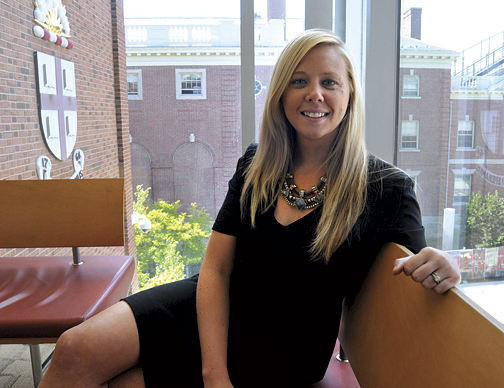 Originally known for its role in intercollegiate athletics, in recent years Title IX has been used to monitor how well schools are preventing sexual harassment and violence. As Brown’s first Title IX officer, Walsh is charged with taking the lead on preventing all gender discrimination and, in particular, sexual violence on campus, a job that puts her in one of the most sensitive places at Brown.

Walsh’s arrival last May grew out of the work of the Task Force on Sexual Assault, which President Christina Paxson formed last year after complaints by campus sexual assault victims highlighted the inadequacy of the University’s handling of such cases. Last spring the task force recommended the University establish a fully staffed Title IX office to consolidate responsibilities scattered across a number of campus departments.

Walsh’s office, President Paxson noted when she announced her selection,“will play a leading role in coordinating education and training on issues of sexual assault and gender-based harassment and discrimination.” Paxson added that Walsh will be key to “overseeing the resolution of alleged violations of Brown’s policies related to Title IX, and implementing the changes in Brown’s policies and practices that result from the Task Force on Sexual Assault.”

A 2007 graduate of Northeastern University with a degree in criminal justice, Walsh earned her law degree at Roger Williams University in Bristol, Rhode Island. For the past four years, she was staff attorney at the Victim Rights Law Center in Boston, representing high school and college victims of sexual violence. She also trained educational administrators and others on campus sexual violence issues, and made presentations on the subject around the country.

Walsh says her goals at Brown include the implementation of a unified policy on Title IX compliance and the fostering of better reporting of sexual violence by students, faculty, and staff. She plans to work on prevention efforts and training, and points out that an increase in the number of reports of sexual violence, at least in the short term, could be seen as a positive sign indicating a more barrier-free and trusted system of reporting.

“I didn’t want to come to a university that wasn’t ready for change,” Walsh says. “Brown was really ready for change.” She reports to Liza Cariaga-Lo, Brown’s vice president for academic development, diversity and inclusion, and she spent her first months on campus meeting with a wide variety of students, faculty, and staff. She has begun training sessions for various groups and will be involved in many more.

Walsh says her role is not as a judge or advocate for complainants or respondents in cases. Rather, she will oversee Title IX compliance, helping “anyone involved in the Title IX process” to understand and navigate it.
What do you think?
See what other readers are saying about this article and add your voice.

Reader Responses to Ready for Change