On campus last May, parents could be seen helping students load up SUVs and minivans with boxes of who-knows-what as dorm rooms were emptied in preparation for their annual scrubbing. In September, many of those same parents returned to campus to help their student dependents move back. What happened in between? 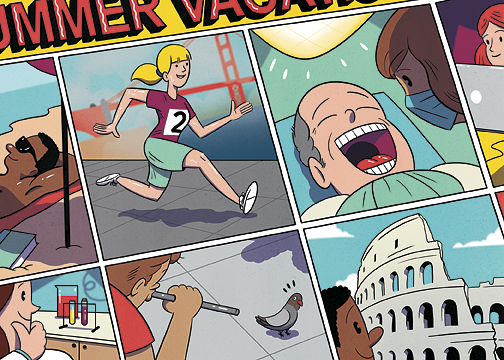 Ryan Snook
As the end of summer neared, we asked students over social media and e-mail to tell us what they’d been up to during their months away from campus. Were they earning money for tuition? Addressing a societal need? Advancing scientific research? Noodling around Europe? Searching for themselves?

The answer, not surprisingly, was all of the above. Kara Hartig ’18 wrote that her summer “was centered around an opportunity to study Pluto.” She didn’t actually get to Pluto, of course, but from the Southwest Research Institute in Boulder, Colorado, she, along with four students from Amherst and Pomona College, collected and analyzed data from the “starlight shadow” that Pluto cast as it passed a star in the Sagittarius constellation. She and her colleagues are now writing a scientific paper about their results.

Jonathan Spiegel ’19, a student in the Program in Liberal Medical Education, who recently had a paper accepted by the Journal of Alzheimer’s Disease, worked on a traumatic brain injury project in a lab at NYU, while Tyler Smith ’16 did a mechanical engineering internship at HeartWare, a medical device company near Boston. He says he helped design and test a device that might one day be used “by patients as a bridge-to-transplant option for heart failure patients.”

A number of students who wrote in worked in health care. Heba Haleem ’18, a health and human biology concentrator, traveled to Germany for two weeks to take a course on aging. After that, Haleem explored London and tutored refugee students in Arizona. While earning her keep as an editorial intern in the biomedical communications office at the Alpert Medical School, Josie Benson ’17 did research for a postdoc and got certified as an EMT.

Medical student Nicole Negbenebor worked with two doctors at Women & Infant’s Hospital in Providence on a project to study the relationship between psychiatric disorders and urgent urinary incontinence, recruiting patients and collecting data for a clinical trial. In collaboration with Mt. Sinai’s preventive medicine department in New York City, Katelynn Pan ’18 bicycled all five boroughs with middle school students as part of a program that emphasizes “positive youth development” by making learning fun. Emily Serrano ’17, meanwhile, volunteered as a dental assistant for the homeless in central Arizona, then hiked up Mount Baldy. Oh, and she also binge-watched Friends on Netflix.

Grace Molino ’18 stayed local by working for Clean Water Action in Providence, while Alana Whitman ’17 went on a Birthright Israel trip and Brian Solomon ’19 worked as a counselor and teaching assistant at the International School of Asia, Karuizawa, in Japan. Tiffany Chen ’18 had so much energy that she did a twelve-week internship at a San Francisco startup (Travelnuts), ran the San Francisco Half Marathon, and then backpacked through Germany and Prague.

In one of the more bizarre accomplishments by a Brown student during the summer of 2015, Jackson Crook ’17, who was staying in New York City’s Chinatown, used a broken shower curtain rod, an exacto knife, a paintbrush, as well as some dental floss, duct tape, and printer paper to assemble a blowpipe that he then used to kill a pigeon. “If you’re interested,” he wrote, “it’s all on video.”

Okay, definitely time to get back to class, Jackson.
What do you think?
See what other readers are saying about this article and add your voice.