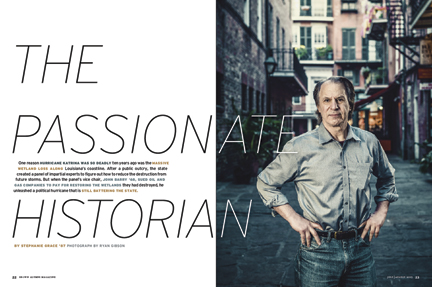 His Own Man
I have known John Barry ’68 since we went to elementary school together (“The Passionate Historian,” July/August). He was always his own man. I am proud of his amazing books, including the Roger Williams book, which was so powerful, and I am proud of his defense of the Louisiana wetlands.
Richard E. Brodsky ’68
Comment from brownalumnimagazine.com

Alums in Nepal
After reading “Tectonic Shifts” (May/June), we want to update Brown alumni on the April–May 2015 earthquakes in Nepal that have hit close to home for many.

Nearly 9,000 people died and more than 22,000 were injured, while up to three million survivors remain in need of aid. While visiting a temple, Sushma Joshi ’96 suffered multiple fractures while buried in rubble in the April 25 earthquake. (She is now recovering at home in Kathmandu.) Christina Monson ’91 has been working with local NGOs in Pharping, on the southern edge of Kathmandu, organizing community support programs, and she is raising funds to support infrastructure rebuilding there. Nirdesh Tuladar ’15 MPH has been building Brown-Nepal connections on campus and through social media in order to provide durable temporary shelters. Prakriti Thami ’11 has conducted research about the relationship between migration and the earthquakes as a research associate at the Centre for the Study of Labour and Mobility in Kathmandu.

Sara Shneiderman ’97 has been raising money for school and community building reconstruction as an adviser to a community-based organization in the Dolakha district, as well as for such organizations as Educate the Children and Core International. Through Drokpa, a nonprofit agency they founded in 1999, Sienna Craig ’95 and her husband, Ken Bauer ’92, have been channeling resources in conjunction with Rasuwa Relief to Rasuwa, a region north of Kathmandu that experienced widespread devastation.

Too Quick to Judge?
I am sure this experiment was well-designed and that the results are interesting (“Not All Crimes are Alike,” July/August). Two comments:

A jury forms its judgment based on much more than the written statement of facts in a criminal case. Based on several experiences as a juror, I know that the actual direct and cross-examination testimony of witnesses is analyzed for its credibility and apparent veracity. The ultimate decision of the jury is a synthesis of the effect of the witness testimony and the specific jury instructions by the judge. It is hard to simulate this with written scenarios.

Is there an online source for the methodology and results of Ms. Begley’s thesis research? Conclusions about the convictions of people found guilty of such awful charges deserve careful scrutiny before popular reporting causes research on the jury process by which they are reached to be misconstrued.
Preston Calvert ’76, ’79 MD
Comment from brownalumnimagazine.com

Marvelous Show
I didn’t know there was a Brown connection to the Netflix series Daredevil, one of my favorite new shows (“Heroes & Villains,” Arts & Culture, July/August)! I loved the Am Civ department, which offered classes in mythology and Beat Generation writers. I’m glad Christos Gage ’93 is putting his education to such good use.
Mary Mazzocco, ’79
Comment from brownalumnimagazine.com

ROTC Debate
I enjoyed reading both the article and the letters about ROTC (From the President, May/June). When I arrived on campus in fall 1967, I enrolled in NROTC largely at the request of my father, a decorated World War II Army Air Corps pilot, partially to avoid the draft and because I hoped it would ultimately pay for my education.

Next fall it suddenly dawned on me that I was basically being taught to kill and to lead others to do the same. On December 4, 1968, I made the decision to end my connection with the program. This was, of course, at the height of both the Vietnam War and the protests against it. At the same time, I was a member of Phi Delta Beta, a fraternity with a high degree of diversity, including a substantial number of high-ranking ROTC members. I received no grief for my decision; nor did I become part of the demonstrations against ROTC.

When Brown decided to move the program off-campus, I was greatly disappointed. Despite my deciding against it personally, I believed that people smart enough to go to Brown were smart enough to make their own decisions. Part of my reasoning, though, was this: The military is unavoidable for some people, for whatever reasons. Doesn’t it make sense, therefore, to have officers who have exposure to liberal arts rather than filling the military only with the gung-ho “gimme-my-gun-and-let-me-at-’em” crowd?

The liberal arts student graduates with a broader understanding of other viewpoints than one would expect of those from military academies, making for a military that is less likely to stage coups. I believe a diverse campus can handle a small number who choose the military path.
Richard K. Horton ’71
Waldoboro, Me.

Brown’s monumental hypocrisy regarding the ROTC program at the University underscores the continued radicalized posture of the faculty and its student body. “Diversity” my derriere. How can one offer those supporting our military an arrangement for ROTC forty miles away in Worcester instead of on campus? Then to have President Paxson give some laudatory remarks for the small percentage of students graduating with the intention of performing military service smacks of a bullfrog puffing up its chest in a small pond. Five out of a class? What a pathetic showing of support for those who must risk all to keep liberty and freedom for all. Brown has no right to be proud.
Rodney H. Ficker ’68
Edgewater, Md.

Reunion Musings
In May, I attended my thirty-fifth college reunion, which culminated on Sunday with the graduation march through the Van Wickle Gates down College Hill. It’s a lovely tradition, affecting in ways I had forgotten, having not participated since my own graduation in 1980.

It’s also quite enlightening, and in surprising ways. On the depressing side, it’s a stark visualization of aging. At thirty-five years out, I marched past the classes before mine, first silently mourning the scarcely recognizable creatures we’ll become, then enviously watching progressively younger and younger versions of myself and my friends morph back into the vibrant young physical specimens we once were.

But that wasn’t the most telling thing. During reunion, many of us had observed, with some surprise, how white our class was. This was partly a matter of who came to reunion, but even taking that into account, we realized that the class of 1980 was hardly diverse at all. It hadn’t seemed that way at the time: we were all progressive back then and felt our school was too. But looking at our class today is disconcerting, to say the least.

It wasn’t just our class either, as the procession made clear. Earlier classes were not just overwhelmingly white, they were also wholly male (remember that Brown only became coed in 1971).

The classes after ours were different, however, and they presented an entirely changed portrait, albeit one that evolved gradually over time. By 1985, there were a few more people of color, almost all African American. By 1995, diversity was growing, and the class had noticeable numbers of East Asians, South Asians, and Latinos.

The most striking change didn’t become apparent until the class of 2005, which was the first class in which people from these different groups began marching together, rather than walking separately in their own tightly isolated communities. Finally came the graduating class of 2015, a magnificent kaleidoscope of people from all different backgrounds—now nearly a majority minority class, mixed and jumbled together, seemingly without regard for race or ethnic background. Many of the graduates openly celebrated their sexual diversity too, proud and unashamed in a way that, once again, stood in sharp contrast to my own class, in which scarcely anyone was yet willing to be openly gay or lesbian. The spectacle was beautiful, and intensely moving.

That our society still has problems is undeniable. It shouldn’t take the killing of a Michael Brown or an Eric Garner to remind us that race and class remain huge problems. Nor (as we have already seen) will a Supreme Court decision recognizing same-sex marriage herald the end of discrimination based on sexual orientation. But it’s impossible to see the pageant of the class of 2015 without realizing how much progress has been made, how different and how much better our society has become, and how much hope we really ought to have for its future.
Larry Kramer ’80
San Francisco
lkramer@hewlett.org