Tucker Nichols ’93 celebrates the latest milestone in his art career with the November publication of This Bridge Will Not Be Gray, a kid-friendly picture book that pairs Nichols’s charming cut-outs with Dave Eggers’s sly text to explain the history of the Golden Gate Bridge. (The book’s designer is Dan McKinley ’01, one of McSweeney’s two graphic artists.) For Nichols, who in the late 1990s left a career as a museum curator to become an illustrator/graphic designer/sculptor/painter/prankster/entrepreneur, the collaboration provides a fresh platform to showcase his signature handmade whimsy. 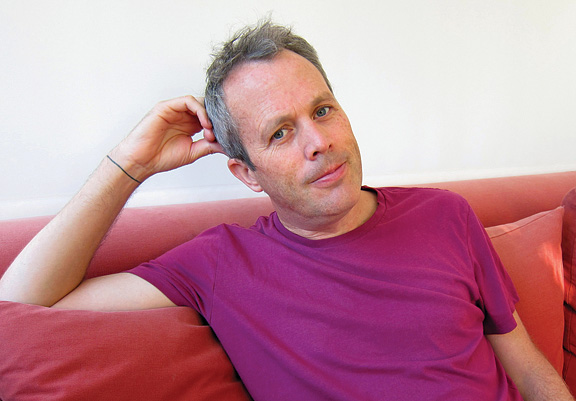 Nichols’s deceptively childlike aesthetic has been compared to the work of Henri Matisse, minimalist artist Richard Tuttle, cartoonist Lynda Barry, and California text-manipulating painter Ed Ruscha. In addition to drawings and paintings, Nichols has produced postcards, limited edition notebooks, T-shirts, toy-like sculptures, and illustrations for the New York Times op-ed pages. With his brother Jon he coauthored the children’s book Crabtree, which was short-listed for a 2014 PEN Award.

Nichols has also worked as an artist-in-residence at Facebook, Bravo TV, Yahoo, and other companies that pay him to create wall murals—what he describes as “fake work.” “I go in every day,” he says, “sit in on meetings, take notes, interview people, and see what it’s like to work there. Then I’ll go create a big mural that’s like a brainstorming session gone awry.”

At Brown, Nichols harbored no ambition to become a professional artist. Instead, he designed his own Chinese art history curriculum with help from Professor (now Emerita) of History of Art and Architecture Roberta Bickford. After earning his undergraduate degree, Nichols soaked up Chinese culture during a vagabond year in Taiwan, then moved to New York City, where he worked as a curatorial assistant at the Asia Society. Everything changed midway through a graduate program in East Asian Studies at Yale when he discovered he had Crohn’s Disease.

“My circumstances became so difficult I felt like I had nothing to lose,” he says. “I’d been drawing since I was a kid, but until I got backed into a corner and became really sick, I never really admitted to anyone that what I really wanted to do all along was to make art, not just study it.”

In 2000, Nichols moved to San Francisco and learned to manage his immune system disorder with periodic infusions of Remicade. A year later, he landed his first solo show. Since then, his low-tech art pieces have been featured at venues including the Drawing Center in New York City, the Denver Art Museum, and the San Francisco Museum of Modern Art. Reviewing the artist’s 2015 exhibition of still-life paintings and drawings at San Francisco’s Gallery 16, Bay Area critic David M. Roth praised Nichols’s “firm understanding of the value of strategically placed, economically executed gestures and forms.… If you look closely, you can’t help but be piqued by his dry wit and generous spirit.”

These days, Nichols bikes ten miles to his San Rafael studio above a tuxedo-rental shop. There, projects incubate and take flight, trajectory unknown.

“You can’t plan art,” he says. “You can’t chart it out. You just have to keep trying things and see what works and trust your gut.”

Reader Responses to A Generous Spirit