Another Call to Action

Accompanied by the wail of ceremonial bagpipes, nearly 3,000 students streamed through the Van Wickle Gates and onto the College Green on September 8 for Brown’s 252nd Opening Convocation, the annual kickoff for the new academic year. Standing in the hottest and muggiest Convocation weather in recent memory, ushers kept the students moving into rows of folding chairs that reached from Faunce House to the middle of the Green. 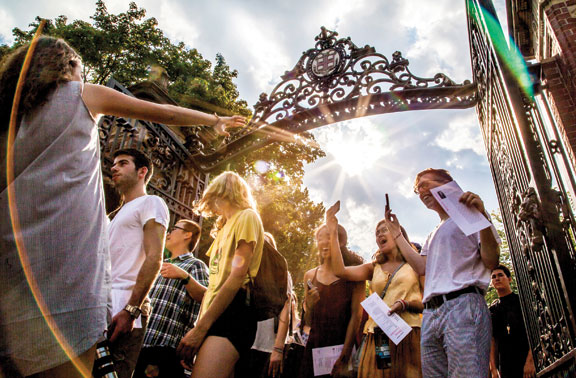 Mike Cohea
"We are obliged to insure we are not perpetuating racial inequities right here on campus," President Paxson told students.

The theme of the day was social and racial injustice. Paxson referred to recent incidents of overly aggressive police actions against African Americans in Ferguson, Missouri; Baltimore; Cleveland; and Cincinnati. Noting that this year is the tenth anniversary of Hurricane Katrina, she cited studies that found, for example, that the average lifespan of African Americans is four years shorter than that of whites.

Given the disproportionately high rates of diabetes, heart disease, and AIDS in the black community, she said, “It’s really impossible not to ask a basic fundamental question: how is it that race, which is essentially a social and historical construct, can still decisively influence the chances that a person does or does not live a healthy, productive life?” Brown, she said, is precisely the place in which to study such questions and to participate in the many programs aimed at reducing injustice around the world. “We are as well obliged to ensure we are not perpetuating racial inequities right here on campus,” she said. “This is a call to action.”

Professor of Africana Studies Tricia Rose was the event’s featured speaker. In a talk titled “Unfinished,” she described learning as a process that won’t simply end at graduation. Surely, she joked, Brown will track all new students after they leave Brown, sending them, among other things, requests for money. But their Brown education will stay with them in a more profound way.

“With each step,” she said, “you will generate a longer road with new questions, new perspectives.”

Rose, who also serves as director of the Center for the Study of Race and Ethnicity in America, then spoke of the unfinished business of the civil rights movement. Before the movement, there was an institutionalized, overt discrimination against blacks, she said.

Referring to The New Jim Crow: Mass Incarceration in the Age of Colorblindness by Michelle Alexander, which all first-years were required to read over the summer as part of the First Readings program, Rose described a new type of racism that has grown in our so-called color-blind society: the mass incarceration of African Americans.

Rose denounced “the way in which we have used, in the post-civil rights era, the ideology of the illusion of color blindness as the rhetorical vehicle for the maintenance and development of a system like the prison industrial complex.”

Reader Responses to Another Call to Action