Brown increased its commitment to improving the health of children this fall when it announced a new institute it is forming along with affiliated hospitals, including Hasbro Children’s Hospital and Women & Infants Hospital of Rhode Island. The Hassenfeld Child Health Innovation Institute, formed with a gift of $12.5 million from the family of retired Hasbro Chairman and CEO Alan Hassenfeld, will target autism, asthma, obesity, and other urgent problems. 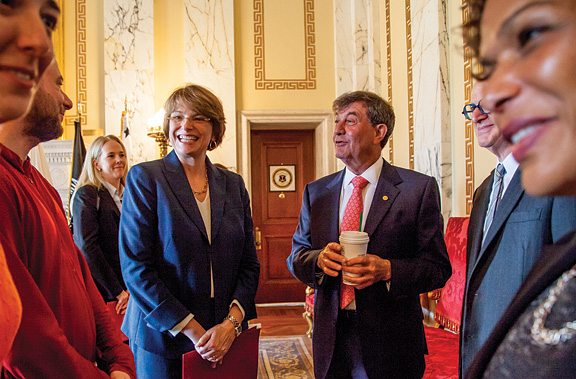 President Christina Paxson and Hassenfeld joined Rhode Island Governor Gina Raimondo and other state leaders at the State House in Providence on September 28 to make the announcement. They said the institute will begin by focusing on three areas: (1) healthy weight, nutrition, and physical fitness; (2) autism and precision medicine; and (3) childhood asthma research. Brown will raise $12.5 million to match the Hassenfeld family gift.

Hassenfeld, a former Brown trustee, said his family’s long commitment to children inspired him to work with the University to identify a set of initiatives that could make a lasting difference.
“Many excellent doctors have researched areas of child health and brought us to a certain level,” he says, “and the question is, can we take those past learnings and create something even more impactful? My greatest hope is that when we look back in ten, twenty, thirty years, we will have created global solutions to alleviating some of these child health conditions.”