The exact origins of the tradition are a little hazy. It can, however, be traced back to a decision made around the time of commencement sixty years ago. That was when four men in the class of 1955—Kappa Sigma brothers and soulmates—decided that they weren’t going to let their close friendship fade. 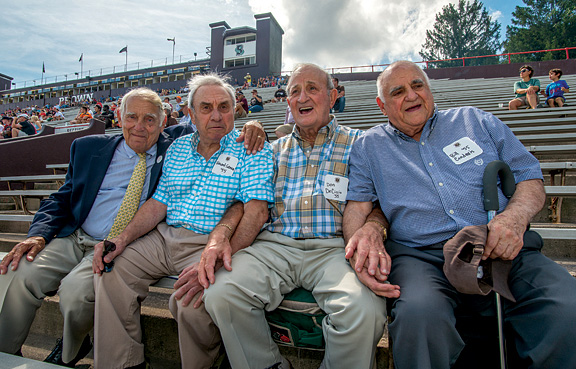 David DelPoio
THEIR 60TH BROWN GAME These fraternity brothers from the class of 1955 have met up over football every year since graduation. From left: Socrates Mihalakos, Vincent Genua, Don De Ciccio, and Bill Condaxis.

It’s a common vow, of course. Who hasn’t wished for college friendships to last forever, only to have them peter out over decades that bring families, careers, and new friendships? But these four men—William Condaxis, Donald De Ciccio, Vincent Genua, and Socrates Mihalakos—had a specific plan. Every year they would attend the Brown–Harvard football game together. There would be no excuses: no mother-in-law would stand in the way, one of them cracked.

Although two of the men had played football during their time on campus, their vow was never about the sport, at least not in a big way. This was about maintaining the friendship, keeping the gang intact. “We are brothers in the truest sense of the word,” De Ciccio says. Condaxis’s wife, Fran, adds: “They are a very rare group of four guys. You see this with women, but not too much with men.”

The obstacles over the years have been significant. Everyone got busy. Children arrived. Careers developed. A job lured one of the men to California for a while and then to Hong Kong. It’s helped that they all have lived in New England for most of the past sixty years. Through it all, amazingly, the promise held. Every year for six decades the date of the Brown–Harvard game was circled on each of their calendars. And every year at least two of them—often all four—met up on a fall Saturday in Providence or Cambridge. 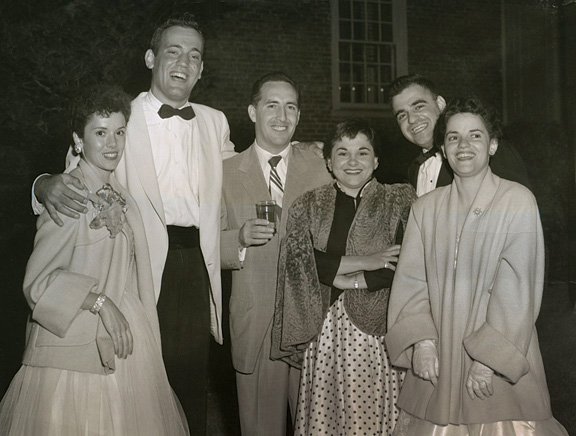 This fall it became clear that Genua, who can no longer walk well, would be unable to get to a night game at Harvard Stadium. It would have been easy for the four ’55ers to call it quits after fifty-nine years and toast decades of memories made. But these four men needed to keep going, and in a way that was true to their all-for-one spirit. Recognizing that it was never really about this particular football game, they compromised. The outing was moved up a week to the Bryant game in Providence. Ending a tradition, it turns out, is not so easy.

So there they were in the white Brown Sports Foundation tent before the September 19 game. It was a balmy Saturday. Mihalakos strode in first, arriving by 11 a.m., setting the pace sartorially in his blue blazer, striped blue shirt, tie, slacks, and suspenders. His wife, Joan, was the scout, watching for the other three men and their wives. By 11:30 the whole gang was in place.
Greetings were warm, a handshake or kiss, but spiced, as ever, with friendly jabs: “Don’t bust my chops today,” De Ciccio said to Genua in a way that told you he looked forward to just that. His big black hat was the immediate target. Soon the men were eating from the buffet and catching up on the latest family news. Their comfort with one another was palpable—they’d met up many times since graduation, under a wide variety of circumstances. Other family members turned up at the reception, some who had gone to Brown years after the ’55ers and some who were in high school and hoping to attend. Even this Plan B game had become a four-family, multigenerational event.
“What has this friendship meant?” De Ciccio mused. “A lot of aggravation.” He remembered that Genua had once put snakes in his bed at Brown. Genua piped in: “You got a hearing aid? You must be old.” 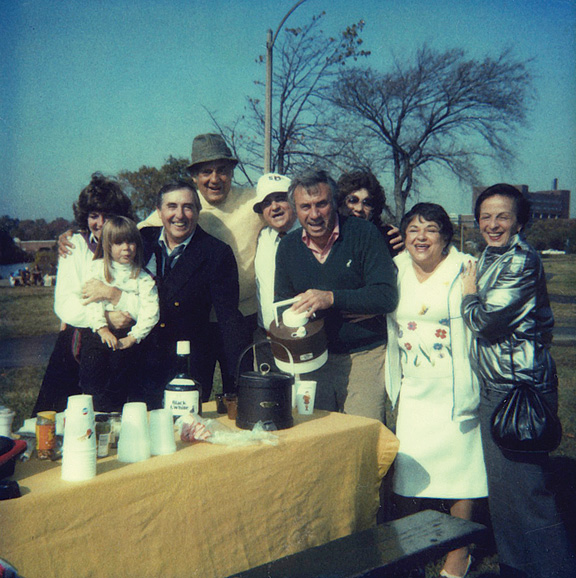 Courtesy Mihalakos Family
TAILGATE PARTIES THROUGH THE YEARS Other friends have come and gone, but the four '55ers have stayed ever true to their tradition.

As noon came and went, the group—slowly—made its way over to Brown Stadium. Just before kickoff, they were sitting there together, a quartet of men in their eighties with their wives, their attention divided between the game and one another.
Ask them about past games and they won’t remember much, except the losses—including a nine-game losing streak in the 1960s. In the sixty years since their graduation, Brown is 20–40 against Harvard, and most wins have come since the late 1970s. It’s those first decades that are seared into memory. But again, it was never really about the game.

The friendship between Mihalakos and Genua actually goes back to high school in Waterbury, Connecticut. Brown recruited both of them: Mihalakos for basketball and Genua for football. Genua met De Ciccio (eventually a  Brown donor for whom the Salomon Center’s De Ciccio Family Auditorium is named) on the first day of football practice. Mihalakos met Condaxis while working at the Ivy Room. Condaxis was older, having served in World War II and then interrupting his studies to serve in the Korean War. He was already a member of Kappa Sigma, and he persuaded Mihalakos and his friends to join. The group was cemented.

After college, “we never lost track of each other,” Genua says. “The game was a vehicle. We loved each other, and so we went to the games.” Over the years, the four men have occasionally gathered for such events as christenings, birthdays, award ceremonies, and retirement parties. Their friendship has also comforted them during sad times, like their parents’ funerals—the men had gotten to know each other’s families during visits to Brown while they were still undergraduates.

All went on to good careers. Genua graduated from Harvard’s dental school (thus the Brown–Harvard connection). Mihalakos had a long run as an attorney, capped by a judgeship in Connecticut, where he still serves on the bench part-time. De Ciccio rose high in the manufacturing business, and Condaxis was an executive for the Jordan Marsh department store company in Boston, for which he lived in California and Hong Kong before returning to New England. Although he got a bye during his time in Hong Kong, he  flew in from California for the Harvard–Brown game.

In the past the group threw elaborate tailgate parties, which were headed up by De Ciccio and noted for their Italian specialties. (“We ate better at one of the football games than at Thanksgiving,” quips Mihalakos.) But as the years advanced, that routine became too much for the men, who have lately settled for the convenience of the Brown Sports Foundation tent. For some, walking to the stadium has given way to riding over in golf carts.

Yet the tradition rejuvenates them. In September, they reverted to college ways, teasing and remembering such pranks as rolling trash cans down College Hill streets. At halftime Mihalakos bought frozen lemonade for his friends. “Where did you get the money?” Genua asked. “I stole it,” Mihalakos shot back. “I took it out of Donald’s pocket.”

Would this be their last game together? Genua and his wife are moving to North Carolina in the spring, and he mused that this might be his last Brown game, though his voice was tentative. The others didn’t talk about it. By now football almost seems beside the point. The friendship is the thing, and that seems set to outlast even this tradition.

By the end of the game, Mihalakos was the last of the ’55ers left in the stands. The others had left early, vowing to get together soon. As he sat there watching Brown try unsuccessfully to eke out a win, he thought again about his friends. “They’re wonderful,” he said, brightening. “What a great day.”

Noel Rubinton ’77 is a writer in Providence.