The end of boring, anonymous postage stamps began in 1981, when officials sought out Al Hirschfeld, one of the most iconic caricaturists of the twentieth century and a pal to humorist S. J. Perelman ’25, to bring flair and art to this tiny canvas. 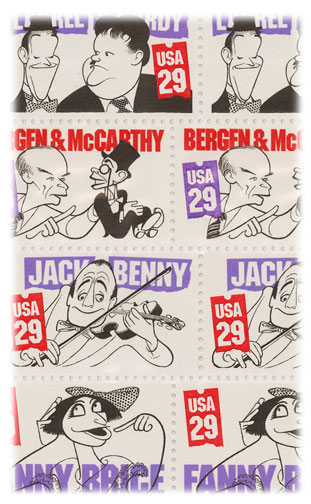 Hirschfeld’s well-known habit of hiding the name of his daughter, Nina, somewhere in his works meant breaking another tradition: that of the self-effacing stamp artist. But, as Postmaster Frank said at the time, “We felt that ‘Nina’ has become such a distinctive element in Al Hirschfeld’s art that our stamp designs would not be true Hirschfelds without them.”It took a decade—we’re talking government work here—but in 1991 Postmaster General Anthony Frank released “Hirschfeld’s Comedians,” a booklet of commemorative stamps depicting five American comics or comedy acts. Out went the long-standing precedent that a stamp’s artist must remain anonymous until at least ten years after his or her death.

Four of Hirschfeld’s stamps—Laurel and Hardy, Bergen and McCarthy, Jack Benny, and Fanny Brice—were displayed at the John Hay Library this fall in an exhibit titled “U.S. Comedians on Stamps and the Process of Creating a Stamp Design.” It follows the original full-sized Hirschfeld caricatures through overlays and mock-ups all the way to their eventual fate as lickable art.

Reader Responses to Stamps of Approval