A Farewell to Tom Gleason

“Sometime in 2001 I began to have a major problem with my tennis game.” So began Professor of History Abbott Gleason’s report in the BAM five years ago about his struggle to remain mentally sharp and in control of his body in the years after he was diagnosed, in 2004, with Parkinson’s. The essay, “Twilight of a Historian,” was an excerpt from the memoir he published that year, A Liberal Education, and it was typical Gleason: smart, witty, self-deprecating, sharply observed, and brutally honest. Tom Gleason died on Christmas Day. 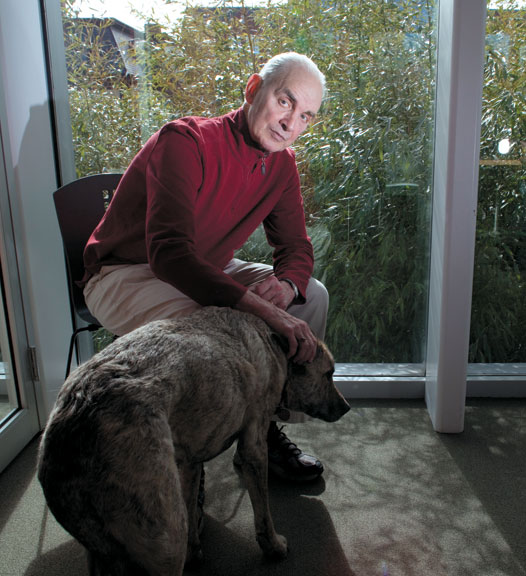 Mark Ostow
Tom Gleason retained an office on campus at the Watson Institute for International Studies, where his old friend and companion Louis was a frequent visitor.

The Tom Gleason that emerges in A Liberal Education was the same inviting polyglot I first met almost twenty years ago, when I was still new at Brown and had asked Gleason if I could profile him for this magazine. We spent many hours together, many of them in his overstuffed office, where the bookcases appeared to be on the verge of collapsing under the weight of all the volumes he had managed to stuff into them. He had just published his first-rate Totalitarianism: The Inner History of the Cold War, which argued that the powerful communist and fascist regimes of the twentieth century, despite their divergent ideologies, shared one absolute characteristic: totalitarian control of their populations. As a Russian historian, Gleason was fascinated with the Soviet Union, and I was interested to see how the fall of that union of socialist republics a few years before might affect a historian whose area of expertise—the very rationale for his work, really—is suddenly and dramatically transformed.

We talked for hours about totalitarianism and about George Orwell and jazz—two shared interests—and I felt like a student again. I could imagine what it must have been like for the generations of intellectually curious students who have sat with Tom Gleason in that same office chair, engaged like two people sitting across a dinner table or on a bench in a park in Moscow sharing ideas as equals—except that one of us had read so much more, thought so much harder, and was so much more articulate. These were characteristics that Gleason wore with all the grace of a teacher who knew that the freshest thoughts are those that spark forth in conversation with the freshest minds.

“I was certainly onto something long ago,” Gleason wrote in A Liberal Education, “when I signed on to the academy. I needed an education, and I got it by learning how to help educate others. I needed to discover how many ways there are of being intelligent, how many ways of being open to the world. I learned that it is better to teach your students how to show what they can do than to demonstrate to them what you can do.”

Over the years, our paths crossed less and less often. I would usually approach him when I saw him walking across campus with his erect posture and his face that seemed to be always in thought, yet always ready for conversation. We’d chat for a few minutes, share our newest musical enthusiasms, and then be on our way. After Parkinson’s forced him to stop teaching, Gleason, eager to give free rein to his creative side, painted more. He also sought out the latest Parkinson’s treatments, in the hopes that his burning curiosity about life and people and ideas could continue as long as possible.

“Curiously enough,” he wrote in the BAM, “despite diminished capacity, you remain—or feel that you remain—the same person. In my experience, people are right when they say that inside every old person a young one is hidden. But that young person is a prisoner, held incognito with no hope of escape."

I still saw him around campus, but far less often, and you could see that much of his concentration was now focused on such basics as keeping his balance. “My gait is labored,” he wrote in A Liberal Education. “I have lost what Oliver Sacks, quoting William Harvey, calls ‘the silent music of the body.’” Now, when I stopped him, I would begin by reminding him of my name, but it wasn’t really necessary. He may not have remembered what to call me, but he still immediately engaged me in conversation. The intense curiosity was still there.

“Accepting that most of life's adventures are past—except the big one, of course—is less difficult than I thought it would be,” he wrote in the BAM. “There is more satisfaction in becoming a spectator: I watch birds at the feeder and observe my children's lives unfold. I cheered as the Red Sox deep-sixed the Curse of the Bambino. Yet my world is shrinking. Isolation, resignation, acceptance—I think I can deal with all that.” Over the last few years I lost track of Tom Gleason, and now I’m sorry I did.

He is survived by his wife, Sarah ’80 AM, and his children, Nick and Margaret.

Reader Responses to A Farewell to Tom Gleason