As a child, the spoken-word poet Jamila Woods ’11 used to listen to her grandmother’s Chicago pastor, who, she says, “blurred the line between speech and song.” It was a style that helped inspire hers. 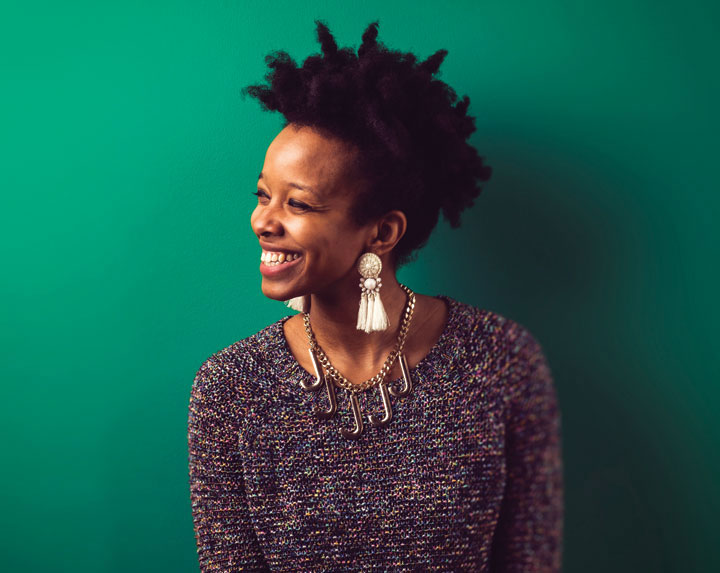 Last fall, Woods, a Pushcart Prize nominee, received what the New York Times called "unusually lucrative good news" when she landed oneof the $25,000 Ruth Lilly and Dorothy Sargent Rosenberg Poetry Fellowships, which are given annually to five poets between the ages of twenty-one and thirty-one living in the United States.

“Jamila’s in that lineage of revolutionary black female wordsmiths,” says Kai Huang ’11, who was her teammate at Brown on WORD!, the spoken-word poetry group. “She’s up there with the Ninas and the Mayas and the Nikkis and the Audreys. Just a legend. I’ve seen her spit [bust a rhyme] in front of crowds large and small and just suck the air right out of the room. It’s really something magical to be a part of.”

Woods is the associate artistic director of Young Chicago Authors, where she teaches and designs arts curricula. She is also an organizer for Chicago’s Louder Than a Bomb, the largest poetry festival in the world. Her recent work appears in Poetry magazine, Winter Tangerine, and the anthology The BreakBeat Poets: New American Poetry in the Age of Hip-Hop. Her book, The Truth About Dolls, was published by New School Poetics Press in 2012.

Woods, who is also a singer, is about to release her first solo recording. Her soul-duo band, M&O (with Owen Hill ’10), has produced two albums: The Joy and Almost Us. The Washington Post described their debut album as “mold-shattering.”

Woods grew up in South Side Chicago, where, she says, her family fostered “a strong sense of cultural identity.” “Jamila,” which her parents chose from an African baby name book, means “beautiful” in Arabic. When she was growing up, her family celebrated Kwanzaa and encouraged Woods to take pride in her African American heritage.

While at Brown, Woods took classes in the Africana Studies department as well as the Theatre Arts & Performance Studies department. Another former WORD! teammate, Laura Lamb Brown-Lavoie ’11, describes Woods as having “a majorly fantastical imagination.”

Brown poet friends still factor into Woods’s life. She says the group, the Dark Noise collective, is her “poetry family.” The collective, she explains, was formed to provide a safe space and support circle for poets of color “that academia did not really provide.” It includes six poets, including Fatimah Asghar ’11, author of a new book called After, and Franny Choi ’11, author of Floating, Brilliant, Gone.

Woods says she will continue making art and hopes to create a fellowship for aspiring female musicians in Chicago. She wants to give young people the resources and the reason to build a community. As for the Dark Noise collective, Woods believes its members will continue to flourish: “Circles rise together,” she says.

Reader Responses to A Revolutionary Wordsmith