As Time Goes By

David and I met on Super Tuesday 2008. I had gone to a party at a midtown Manhattan bar to view the election returns with a Brown classmate.

"So how do you two know each other?" David asked us, making light conversation while looking over our heads around the room. 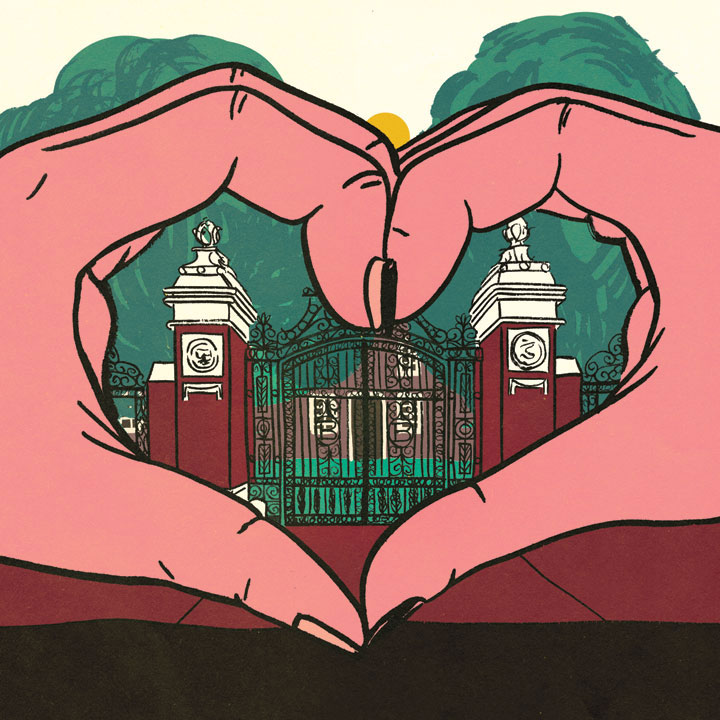 I had his attention. He had gone to Brown, too, and was a fellow history concentrator. Our time on College Hill hadn’t overlapped, but still we felt an immediate kinship. As Hillary Clinton’s vote tally climbed and the bar slowly emptied, we stayed, laughing and talking about Gordon Wood and Silver Truck and the Naked Party (neither of us had gone, but we wished we had).

That night was the beginning of a stirring year-long relationship that included much reminiscing about our respective Brown experiences, though never a literal journey back to College Hill. He told me he and his friends had won the lip sync contest for first pick in the housing lottery. I told him about the time I gave a campus tour to Danny DeVito, Rhea Perlman, and their daughter.

David traveled to Brown for his tenth reunion while we were together. He called me from the College Green during Campus Dance, holding out his phone so I could hear the big band music. I could imagine the white lanterns strung from the elms, feel the Providence humidity, and picture the fiftieth-reunion class mingling with the fifth, bound by a common bond, as David and I were.

For David’s birthday I gave him my prized copy of the 1810 convocation program. I had picked it up while an undergraduate from a giveaway pile at the John Carter Brown Library. I had held onto it all those years, never imagining I would one day meet a fellow Brunonian who would also appreciate letterpress ephemera and such wonderful Old English spellings as musick and rhetorick.

When we caught up months later, we talked about things we missed from our relationship. Near the top of David’s list was our Brown-ness. “It makes me sad to even talk about Brown anymore,” he said. It had been such a big part of the “us” that no longer existed.

There’s something about Brown that connects alums not only to the institution but to one another. It’s the unconventionality, sense of adventure, and fiercely independent spirit in all of us that drew us to Brown in the first place. It’s the shared uniqueness of our experience there.

“Brown people just seem to love Brown,” alums from other colleges sometimes say to me. “Did you love it?”

I nod and smile, thinking about my school, where cracked pots are revered, rock bands welcome violinists, and nobody is too cool to pantomime the McDonald’s logo in front of their classmates. I think of the art history class spent viewing nineteenth-century portrait miniatures in the RISD Museum, and the journalism class that led me to a remote glass-blowing studio in downtown Providence.

When Brown alums collide out in the world, an energy is created. Even though things between us didn’t work out, David and I will always have the Van Wickle Gates—more so than any landmark we actually visited together.

Julie Brener lives in Manhattan, where she works in business development for an experience design firm.

Reader Responses to As Time Goes By