On November 12, Brown undergraduate and graduate students staged a “Blackout,” a demonstration of solidarity with black students at the University of Missouri. Mizzou’s students had been protesting their administration’s lack of response to a series of racist incidents on that campus and quickly pressured Mizzou’s president to resign. At issue, the students said, was not just the president’s inaction, but a history of institutionalized racism and underrepresentation of people of color at their university. 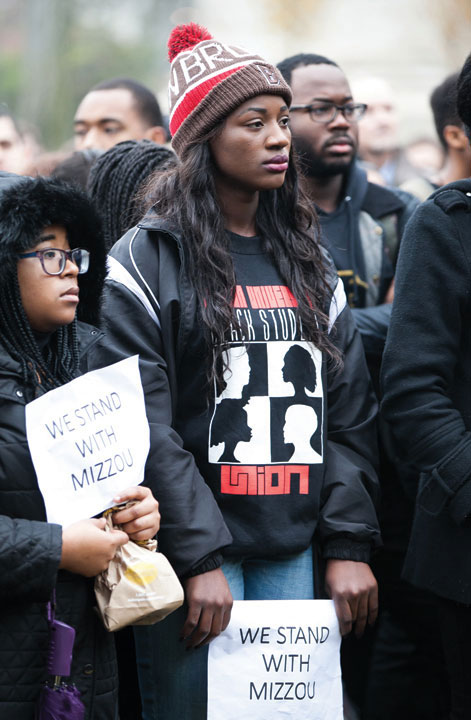 For the Paxson administration, the issue of race on campus has been simmering since at least October 2013, when New York City police commissioner Ray Kelly, who was visiting campus to discuss that city’s “proactive policing”—including the stop-and-frisk policy that disproportionately targeted black and Latino men—was shouted down and prevented from speaking. President Paxson apologized to Kelly, and the night after the incident held a campus forum to begin a conversation among students, faculty, and administrators about race and inclusion. When she issued her strategic plan, “Building on Distinction,” the same month as the Kelly incident, it admitted that the University’s attempts to diversify its faculty “have had only modest success.”

The administration began examining what more it could do. Things became heated again last October, when the Brown Daily Herald published two columns that, after facing criticism, the editors apologized for printing and condemned as racist. Then, on November 10, the day after Mizzou’s president resigned, Paxson and Provost Richard Locke sent a campuswide e-mail acknowledging that Brown had yet to achieve a truly inclusive climate. In addition to the increased faculty diversity promised in the strategic plan, they vowed to take other actions. These became part of “Pathways to Diversity and Inclusion: An Action Plan for Brown University,” which was slated to be released at the end of the month.

Not good enough, said the protesters on November 12. They cited additional steps they believed the University should take. After the Blackout rally in front of University Hall, the crowd moved to the College Green, where Africana Studies graduate students led a “teach-in” on social justice, focusing on race but including all underrepresented or disempowered groups, including women and members of the LGBT community.

Grad student Shamara Alhassan read a list of demands that had been written by thirty-five graduate students of color from various academic disciplines. These included a call for increasing the number of faculty of color and “the introduction of compulsory, in-person, and regular anti-oppression training” for students, faculty, staff, and campus police (see sidebar, “Do Better”).

Then, two days later, during a conference at Brown of Ivy League Latino students, Dartmouth student Geovanni Cuevas alleged that he’d been barred from entering the campus building where he was staying and then assaulted and handcuffed by a Brown public safety officer. President Paxson immediately apologized “for the hurt, anger, confusion, and frustration that this incident has contributed to our ongoing discussions about racism and inclusion at Brown” and promised to send letters of apology to the presidents of the schools that had sent delegates to the conference. The public safety officer was assigned to “administrative duties,” and as of this writing the investigation continues.

As a result of the fall’s events, the Paxson administration released a draft of “Pathways to Diversity and Inclusion” nearly two weeks earlier than planned, calling it a “working document” open for discussion. (The campus community could comment anonymously online.) “Pathways” drew notice nationally for including a pledge of more than $100 million over ten years—about three percent of projected spending—to increase diversity on campus. Among the document’s many proposed actions was doubling the number of faculty “from historically underrepresented groups” by the year 2025. It also promised to increase support for students of color, to offer professional development in diversity issues to faculty, and to gather data on “the campus climate around issues of race, income and gender identity, and respect for intellectual diversity.”

Student activists argued the report didn’t go far enough. Doubling the number of faculty from underrepresented groups by 2025 would, they pointed out, keep Brown far short of the percentage of racial and ethnic minorities in the U.S. population, which is around 40 percent. Although students of color do make up 39 percent of the class of 2019, says Africana Studies grad student Bedour Alagraa, “It doesn’t matter if you get 70 percent students of color when you have faculty and administrators who are mostly white.” On December 3, a group of students confronted Paxson and Provost Richard Locke inside University Hall to denounce the diversity plan as “insufficient and illegitimate,” restating and adding to the November 12 demands and calling for more time to contribute comments. (Some staff members had also called for an extension for workers who have limited Internet access. The deadline was extended to January 8.)

Also on December 3, a dozen faculty members in ethnic studies sent Paxson their edits of the draft document —dubbed the “5 percent plan” after the percentage of Brown’s budget they believed should be spent on diversity efforts. The edits also replaced vague promises with specific goals, in one case, for example, changing “make a concerted effort” to “double the funding.” Locke reportedly thanked the group for its recommendations, saying it was just the kind of feedback the administration was looking for.

Despite the administration’s receptivity to the activists and willingness to keep up the conversation, the protesters remain skeptical. “I see the administration hiding behind a veil of vagueness,” says Watufani Poe, a graduate student in Africana Studies. “Brown needs to live up to its own expectations,” Alhassan says. She and other graduate student activists point to a long history, going back to 1968, of student demands and University promises that have not all been met. In fact, even the core 1968 demand to raise the percentage of black undergraduates from two percent to a more representative 11 percent has not been reached. (Only 6.7 percent of current undergraduates are black, compared to 13.2 percent of the current U.S. population.)

The criticism from students and faculty, however, is not that Brown has done nothing. In the years right after 1968, the percentage of black students increased sharply, from two percent to a high of nine percent in 1978. A black admissions officer was hired. The Afro-American Studies program (now the Department of Africana Studies) was founded, as well as a summer transition program for black students. The Third World Center opened. Since then, there have been many other advances for students of color, including Latinos and Asian Americans. In a 1992 follow-up to a 1986 report by a University committee on minority affairs, 160 pages detailed how Brown addressed each recommendation. And last fall, writing about colleges and universities grappling with their historical connections to the slave trade, Marian Wright Edelman, president of the Children’s Defense Fund and a longtime civil rights pioneer, praised Brown as a model, citing its 2006 slavery and justice report.

But Brown’s actions have fallen short, activists say. As a result, they argue, some of the most basic problems remain, such as a lack of diversity among the faculty and a campus where students and faculty of color do not feel fully included. Some alumni understand their frustration. Ken McDaniel ’69, who was a spokesman for the 1969 black student walkout, says he hopes the University can move past “numbers and structures” and find ways to build a community that’s not just diverse, but truly inclusive. Tesmerelna Atsbeha ’01, a black alumna and former student activist, says she’s been impressed by Brown’s examination of its past connections to slavery. But when she read about grad students’ demands last fall, her reaction was: “Wow, they’re dealing with the same stuff we were dealing with, and it’s fifteen years later. It’s just disappointing. While you’re away, you hope things are improving.”

President Paxson says what’s different is that the new plan has more teeth. “Pathways” requires that all departments develop diversity plans and mandates yearly progress reports. It calls for a committee, which will include students, to meet quarterly to assess progress. A new staff position, director of inclusion engagement, will be created to keep Brown moving forward. “We’re not asking that our community simply take it on faith,” she says.

At a December 4 forum with Brown staff, Provost Locke acknowledged the University’s repeated failure to fulfill all its stated diversity commitments. “If you actually read the plan of ’68 or ’92 or 2006,” he said, “many of the goals are the same. We hope that this time is going to be different. We’d like to show the rest of the country what can be done.”

Thirty-five graduate students from a coalition “of concerned graduate students of color,” representing departments in the social sciences, sciences, and the humanities, released a statement November 16 aimed at the Paxson administration. Included were these demands:

• an increase in faculty-of-color hiring and retention

• visible and administrative accountability for departments and centers with “racist hiring and retention policies,” as well as anti-black pedagogy

• better quality of life for graduate students of color

• in-person and compulsory Title IX training for faculty, staff, administrators, students, and members of the Department of Public Safety

• that Brown “hold itself accountable for the past, accepting its burdens and responsibilities along with its benefits and privileges” by meeting fully the recommendations from a number of reports and letters on diversity going back to 1968