The Wonder Down Under

It's not exactly a trip to the Statue of Liberty or Muir Woods. To get to Cashes Ledge, part of a proposed national monument in the Atlantic Ocean’s Gulf of Maine, you have to get in a boat and head to a spot about eighty miles east of Cape Ann, Massachusetts. After the four-hour trip, you drop an anchor near Ammen Rock, the tallest pinnacle in Cashes Ledge, a twenty-five-mile-long underwater mountain chain. Ammen Rock rises from the sea floor 720 feet below to within thirty feet of the water’s surface. Once there, divers set up a buoy marking the spot, the only clue to Cashes’s underwater marvels. Then they jump into forty-degree water that’s moving at a speed of two to three knots—about as fast as a class II rapids—and “swim like hell for the buoy,” says Professor of Biology Jon D. Witman, who has been conducting research at Cashes Ledge for more than thirty years.

As you pull yourself hand-over-hand down the buoy rope, Witman says, you slowly make out what looks like the ocean floor. But, as you get closer, you realize it's moving. What you're looking at is the canopy of an undersea jungle, a forest of kelp exponentially thicker than any you'll find elsewhere in the coastal Gulf of Maine. Because of the distance between Cashes Ledge and the coast, where the water is clouded by runoff and other pollutants, sunlight penetrates deeply into the clear, cold water. As a result, the kelp grows as far down as 100 feet, and it growns unusually tall—up to fifteen feet. 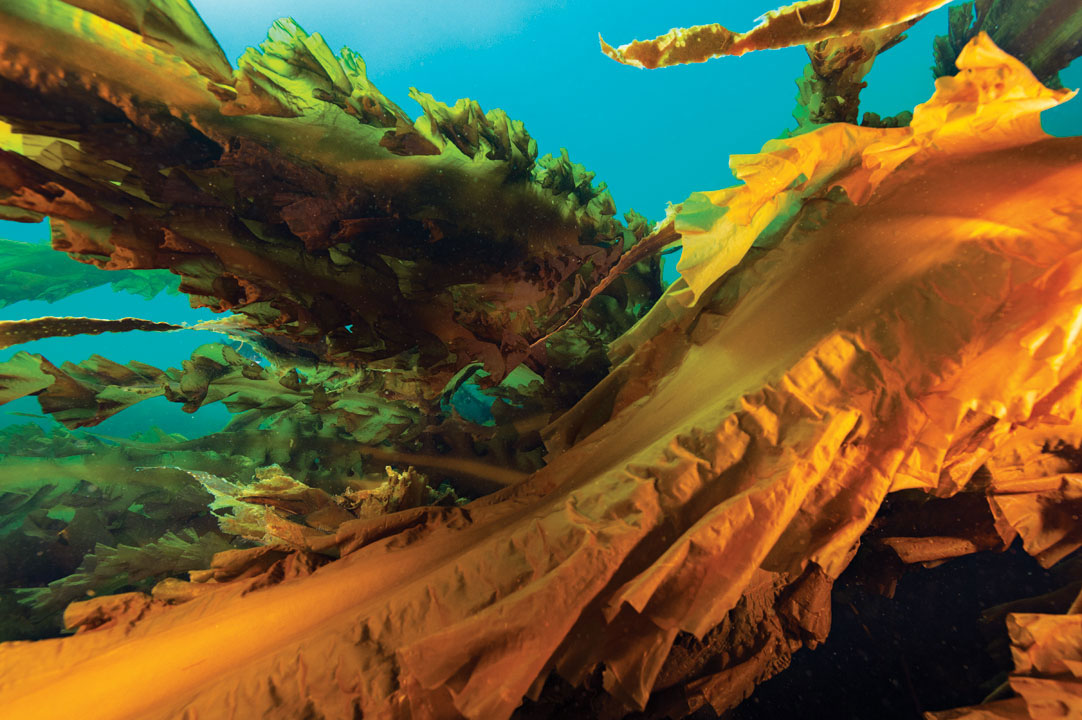 Brian Skerry
IT'S A JUNGLE DOWN THERE: At Cashes Ledge, an underwater mountain range eighty miles out into the Gulf of Maine, kelp grows exponentially thicker and longer, and sea creatures abound.

The profusion of kelp is just one indicator of the biomass living in and around Cashes Ledge, Witman says. The area contains more anemones, more fish, more sharks, more whales—more of nearly everything—than any other part of the Gulf of Maine. At Cashes, 100-foot-high underwater waves pump extra nutrients down to the bottom. The surface ripples created by this moving water can be seen from space. The disruption of the mountains interacts with the current and the mix of water temperatures and densities, and pushes bands of warmer phytoplankton-rich water down to the ocean floor. Because of this, Witman says, one group of divers at Cashes will experience crystal clear, cold water, and an hour later the next group will find itself in “pea soup,” as the wave pattern brings pulses of concentrated food to the invertebrates at the bottom of the food chain. Thanks to the extra light and extra nutrients, Cashes Ledge is an undersea ecosystem on steroids

“It’s a visually stunning landscape,” says PhD student Robbie Lamb, who has accompanied Witman on his research dives over the past few years. Lamb remembers his first look at Cashes, when he wore only a wetsuit—instead of the warmer dry suit most divers use there—and got so cold he shook for a half-hour after each dive. “The sheer visual spectacle of seeing the place was completely worth it,” he says. “The rock underneath the kelp is covered in mussels and sea stars. There are giant cod all around you. I felt like I was on a completely different planet.”

Ten years ago, when the Conservation Law Foundation (CLF) asked Witman, who teaches Brown undergrads the basics of ecology, to recommend an ocean area to protect, Cashes was the obvious answer. Witman describes it as a “Disneyland of biodiversity” containing every kind of ocean bottom habitat, all in a concentrated space. Combined with the food pump provided by the waves, this dense habitat contains a rare proliferation of sea creatures representing an unusual variety of species. The complexity helps create more ecosystem stability and probably greater resilience to withstand such threats as climate change. With this range of creatures filtering water, removing carbon, producing oxygen, and providing all the other “ecosystem services” that the fish we eat depend on, Witman says, Cashes is a key to the health and productivity of the entire Gulf of Maine, including areas where commercial fishermen harvest cod.

The CLF was convinced. In 2007, the group persuaded Witman to lend his scientific expertise to a campaign to protect Cashes Ledge as a marine national monument, which would permanently close it to fishing and oil drilling. Witman agreed, and last September the campaign finally went public. The proposal’s first hearing, held in Providence on September 15 by the National Oceanic and Atmospheric Administration, was crowded and contentious. Discussion was so heated that the hearing went on an hour and a half longer than planned. 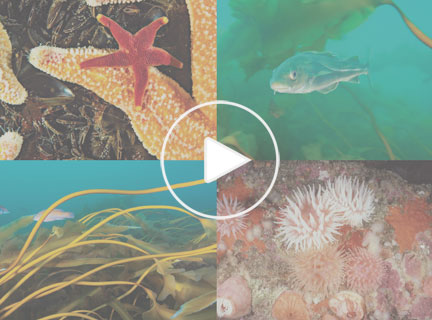 All photos by Brian Skerry
To see a more photos from Cashes Ledge click here.

On one side were Witman and Lamb and a host of environmental groups, including the CLF, the Pew Foundation, and the Sierra Club, and even a couple of commercial fisherman. On the other side were fishermen and others who argued that, for starters, the area is already protected: Cashes Ledge is in fact temporarily closed to bottom fishing by order of the New England Fishery Management Council. Opponents of the proposal, including Maine governor Paul LePage, believe that making the area a national monument—thus closing it off forever—is undemocratic, and doesn’t allow for an ongoing balancing of the needs of the ecosystem with the needs of those who depend on the sea for their livelihood. They object to the authority provided to the president by the Antiquities Act of 1906, which created the national monument designation and would allow President Obama to just sign the designation into law, circumventing the lengthy and difficult Congressional approval process that’s required to create a national park.

“It’s such a classic confrontation,” Witman says. “It’s a battle between short-term gain and long-term gain.” For Witman, a win for the national monument designation would actually be a win for fisherman, too. He remembers one dive at Cashes Ledge twenty years ago when, he says, “We couldn’t see more than three feet because there were two hundred cod in our face.” Since then, overfishing has decimated the cod population. Protecting the area, he argues, can create “a refuge for commercial species,” helping the fish stocks rebound.

Witman also points out that the world’s oceans have become so abused that most scientists believe at least 20 percent of them should be protected. The United Nations Strategic Plan for Biodiversity, adopted in 2010, set an initial goal of protecting 10 percent of marine and coastal areas by 2020. Right now less than 2 percent of our oceans are under such protection.

“I didn’t start out to be an environmental advocate,” Witman says, “but here I am in the middle of this battle.” He hopes to help educate the public the way he educates Brown undergrads about the crucial importance of protecting our ecosystems. “Otherwise,” he says, “we’re going to exploit the ocean to such an extent that all we have is jellyfish.”

Witman’s rich vision comes out of three decades of Cashes Ledge dives: he’s seen what overfishing can do. “It was like a time machine into New England hundreds of years ago,” he says of his early dives. “We saw schools of bluefin tuna as big as divers. The tuna were chasing the herring, using the topography of the cliffs to pin them against the rock walls. The herring were spooking these schools of pollack, which were diving down and spooking the cod on the bottom. We were lying on the bottom, being pelted by fish.”

Witman hopes protecting Cashes Ledge by making it a national monument will recreate some of that sight. And if we don’t set aside more ocean habitats? “I think we’re going to go down in history,” he says, “as one of the most myopic generations for not protecting our ecosystems.”

Reader Responses to The Wonder Down Under