Beyond Space and Time

Over the past century, scientists have puzzled over a curious phenomenon that calls into question our basic assumptions about space and time. Nonlocality, the ability of two particles in different places to affect each other instantly, could help physicists better understand black holes, the workings of gravity, and the origin of the universe.

Spooky Action at a Distance, by George Musser ’88, traces the messy efforts to understand nonlocal phenomena, which can be found in multiple fields of physics. Albert Einstein struggled with these strange occurrences; his description of them gives this book its title. Nonlocal phenomena so violate what we believe about the physical world that they appear almost magical. Musser, author of The Complete Idiot’s Guide to String Theory, describes physicists’ struggles to grasp how nonlocality fits into theories about the universe and physical reality, covering everything from string theory to the multiverse. 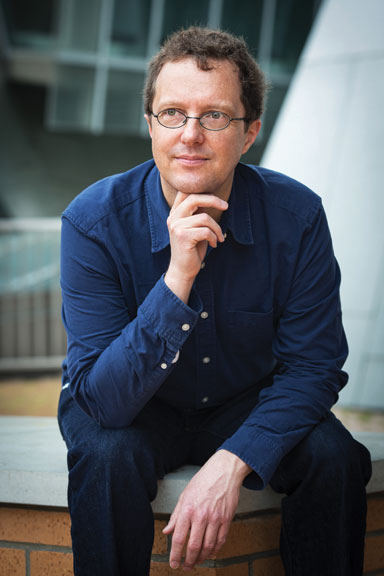 In this inventive and accessible book, he takes the reader on a journey into the lives of experimental physicists observing harmonious particles separated by space, astronomers finding galaxies that appear statistically identical, and cosmologists collecting data that must come from the surface of a black hole and from deep within it simultaneously.

“Ever since there have been physical sciences, they have been based on a spatial and temporal view of the world,” Musser says. “Objects exist in specific locations, they exist for durations of time, and they move around in space. These nonlocal phenomena are challenging the essential narrative that physics is trying to create of the world.”

Not surprisingly, nonlocality has sparked contentious debate. Spooky Action at a Distance explains how scientists can agree on the experimental data while holding wildly differing explanations for that data and what it means. Musser views the controversy as a model for understanding any dispute in science. “We deal with scientific controversies all the time,” he says. “How does one navigate disagreements among experts?”

Musser became aware of nonlocality as a graduate student in physics at Cornell, but what revived his interest was hearing about more instances involving the structure of space and time. “It seemed to be a general phenomenon,” he says. “Examples were popping up like prairie dogs in a lot of different places.” Not only was Musser seeing these nonlocal phenomena rear up in different settings, there seemed to finally be a glimmer of an explanation for them. “What had seemed magical may have a rational basis to it,” he says. “Most people assumed this would be the case, but they didn’t know what that explanation could be. Now, we’re beginning to see it—namely, that there is some question of the very structure of space and time.”

Musser posits that, contrary to our intuitions, space and time may not be fundamental ingredients of the world. Instead, they may be constructions. “Every time you have a construction, you can have an imperfection in that construction,” he says. “Nonlocality may be that kind of imperfection.”

One of Musser’s messages is that science is driven forward by questions and disagreements, just like those surrounding nonlocality. It might be frustrating for those of us seeking definitive answers, but it’s a healthy process that moves the field forward.

Reader Responses to Beyond Space and Time