Ty Walker’s parents did not want her to snowboard. So when, at age seven, she asked for a snowboard for her birthday, they stalled. Her birthday was in March, which meant the season was nearly over. They thought she might just forget about the idea. 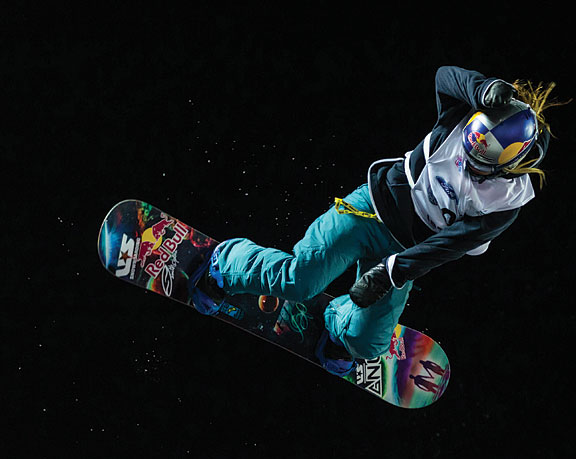 Evren Kalinbacak/Alamy
Ty Walker '19 flying high at the 2014 inaugural big air snowboarding World Cup competition, which she won. Next, she headed to Brown to study chemisty and snowboard in fornt of the Ratty.

“I didn’t forget, and they got me my snowboard the next season,” says Walker ’19, who, as one of the best big air boarders in the world, now flies off cliff tops and launches into aerial tricks while dropping to clean landings 140 feet below.

Two years ago Walker competed in the Sochi Winter Olympics in slope-style snowboarding and went on to win the inaugural big air World Cup event in Istanbul that same year. Now she has her sights set on a podium finish at the 2018 Winter Olympics in PyeongChang, South Korea, where big air will make its Olympics debut.

If she can keep herself in one piece, that is. Walker was scheduled to compete at Boston’s Big Air at Fenway Park in February, but injured her back during a practice run and was forced to withdraw from the event. The injury occurred just as she’d completed a ten-month recovery from knee surgery last March to repair a torn ACL.

“This was one of my first events back,” she says. Walker has also had to deal with a significant heel injury that limited her ability to compete at the Sochi Games. “Injuries are part of the sport,” she says. “We fall all the time. We crash. There are really big jumps.”

Walker is known for her backside 720, a trick that involves spinning twice in the air. “That is my signature trick,” she says before launching into a language in which few outside the sport are fluent. (It sure sounds impressive.) “But I’ve done more difficult tricks—cab switch 900s, backside 900s, things like that.”

Sibling rivalry gave Walker her start in the sport. Although she grew up in New York City, Walker and her family skied in Vermont on winter weekends. “My older sister was better than me at skiing,” she says, “so I really hated skiing. I decided that I wanted to snowboard.”

It didn’t go so well at first. She was rejected by the Killington Ski Club, which grooms kids for competition. In her defense, she had only been snowboarding once or twice at that point. One of the coaches agreed to work with her to get her up to speed to join the rest of the team. From there, Walker started doing well in local and regional competitions, eventually qualifying for nationals. During her second year at nationals, she won three of the five events she entered. “From there it started snowballing,” Walker says. “I got a lot of attention and started getting invited to bigger and bigger events.”

All the travel and training made school a challenge. “All of high school, I did all of my classes online,” she says. “It definitely required a lot of self-motivation.” She demonstrated enough motivation to get into Brown, where, she says, the open curriculum was a perfect fit. “I like the freedom Brown gives you to set your own path and make your own decisions regarding your education,” she says. “Brown offered that more than any other school.

Walker has enjoyed her first year on campus and has adjusted well to being back in the classroom. With plans to attend medical school after graduation, she has challenged herself with courses in chemistry and calculus. However, she still has managed to have some fun. After a Providence snowstorm in early February, she built a snowboarding rail on Wriston Quad right in front of the Ratty.

“It was so fun,” she says. “I ended up riding that rail for four or five hours. My friends would take turns pulling me into the rail so I had enough speed. It was really cool.” Although she has recently been out of commission because of her back injury, Walker trains hard during the off-season, running twenty to twenty-five miles a week and exercising in the gym five or six days.

But when the snow is right, she’s back to doing cab switch 900s and backside 900s. By 2018, Brown sports fans will finally know what those are.