Rachel Aviv ’04, a New Yorker staff writer since 2013, often writes about things to which the rest of the media pay scant attention: euthanasia for non-terminal patients, for example, or the science that tries to explain pedophilia, or child evangelists. In a campus lecture called “Writing about Marginalized People,” Aviv read excerpts from some of her most powerful stories. The event, which took place in the Brown/RISD Hillel Center, was part of the English department’s biennial Brown Great Nonfiction Writers Lecture Series. 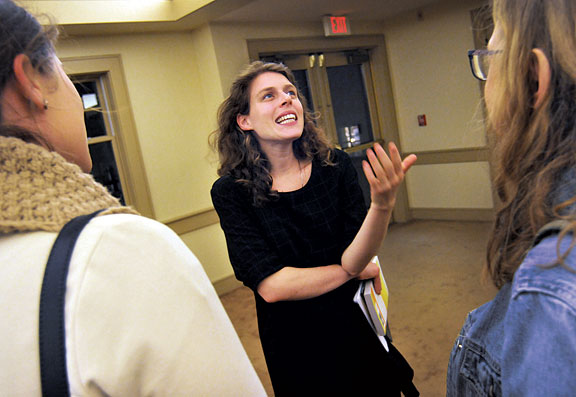 Frank Mullin
Aviv descibed how she comes up with some of her best New Yorker story topics by "aimlessly Googling."

Aviv said the best nonfiction reads like a novel—she says she would have concentrated in fiction at Brown but was “terrible at coming up with plots”—and so a good topic is not enough. A good story needs a good character.

In her New Yorker piece “Netherland,” this was Samantha. At first, Aviv says, the story was meant to echo the oft-told narrative of homelessness among LGBT youth: kids kicked out of their family’s home because they’re gay. But Aviv couldn’t find anyone who conformed to such a tidy narrative. For everyone she talked to, she says, “the reasons were so much more complicated.”

Then she found and befriended Samantha—a bookish, psychologically complex young woman who wrote poetry and had planned her homelessness meticulously. Aviv says her reporting gave her a fresh perspective, enough that she gave up on her original angle. With Samantha as her guide, she realized that, instead of discussing the painful past, her subjects wanted to tell her how they’d found makeshift “families” with one another. Moved by this act of choosing dignity over shame, Aviv had found the focus of her piece.

People like Samantha are “not natural-born heroes,” she says, “but they articulate states of mind that otherwise might not get translated into words.” And that—a compelling character and an unexpected perspective—is how a good story is made.