Get Prejudice Off the Team

Sports is the toughest remaining bastion of hypermasculinity,” says Michael Balaban ’74, a former Wall Street financial adviser who has thrown himself into the fight against homophobia in sports. What’s needed, says Balaban, the chairman of the board of Athlete Ally, a New York City nonprofit working to end LGBT bias in college and pro sports, “is to educate and activate athletic communities to eliminate homophobia and transphobia in locker rooms and on playing fields.” 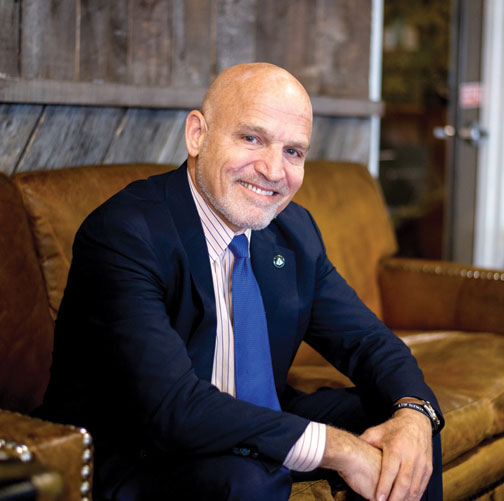 The Women’s Sports Foundation calls homophobia “the plague of female sports teams.” Outsports.com, meanwhile, reports that 83 percent of gay and lesbian competitors have heard gay slurs from teammates. As a result, many hide their sexual orientation, in part by never referring to their partners or spouses and by staying out of conversations about dating.

Athlete Ally was founded in 2011 by Hudson Taylor, a former three-time All-American wrestler at the University of Maryland. Balaban, who played football at Brown but didn’t come out as gay until he was 24, has helped enlist student volunteers for Athlete Ally at 75 universities, including Brown. He’s also rounded up more than 180 professional and college “ambassadors” who have vowed to call out homophobia and transphobia when they see it and to speak in favor of inclusion. In addition, Athlete Ally ambassadors have included Yogi Berra and such sports luminaries as the mixed-martial-arts fighter Rashad Evans and tennis stars Martina Navratilova and Andy Roddick. Closer to home, Former NFL wide receiver Bobby Sewall ’10 has joined Athlete Ally to create awareness events within the league.

Balaban has secured grants from foundations and initiated partnerships with the Women’s National Basketball Association, Major League Baseball, and American Apparel, whose “Principal 6” campaign sells clothes featuring language from the Olympic charter, proclaiming that sport does not discriminate “on grounds of race, religion, politics, gender or otherwise.” Balaban also cowrote an NCAA handbook on LGBT issues that is distributed to athletic directors and coaches at every American university.

Taylor, meanwhile, visits colleges and high schools to “educate and empower athletes” to battle hatred. Specifically, Athlete Ally tries to unite the efforts of athletic departments and gay support groups on campuses in hopes of spurring conversations on the subject. One topic of these conversations is the hurtful nature of artificial constructs of masculinity and femininity. Another is the automatic—and often inaccurate—linking of “masculine” traits in a female or “feminine” traits in a male with homosexuality. Not that you even need to defy gender norms to get harassed: it can happen to anyone, even heterosexual players.“If you’re in boys’ sports, there’s nothing worse than being like a girl, and, if you’re in girls’ sports, there’s nothing worse than being manly,” Balaban says. “Athletics is all about beating the opponent, but initially you have to beat out your teammates, so you use language to make them less than you—faggot or dyke,” he adds. “If you’re a gay man or woman and you’re playing, it’s scary, it’s hostile. You have to ignore it, or try to.”

Balaban, who double concentrated in international relations and political science, calls the campaign “a battle that’s being won very rapidly.” He says, “It’s becoming unacceptable to use the F word, same as the N word. That doesn’t mean people’s views have necessarily changed yet. But look at the polls: 85 percent of today’s college kids support same-sex marriage.”

Through Balaban’s efforts, Athlete Ally is only now gaining the funding and staff to take the fight to the nation’s high schools. The organization is also looking outside the United States, where there is a huge need for heightened sensitivity, he says.

“Eventually, we’ll surmount these hurdles,” he adds, “but we’ve still got barriers to overcome.”

Reader Responses to Get Prejudice Off the Team