During its long gestation period, the idea behind How To Pass as Human: A Guide to Assimilation for Future Androids, by Nic Kelman ’00 MFA, evolved almost as rapidly as the actual science of artificial intelligence that forms the underpinning of this, his third novel. 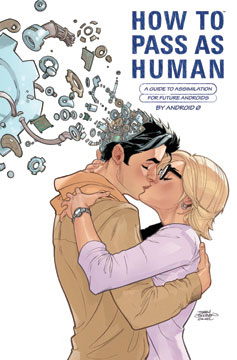 Initially, Kelman, who earned his  undergraduate degree in brain and cognitive science at MIT, conceived of a book about earthlings from the perspective of two robots who land here from outer space. Then he rethought the concept to make it a guide to humans as written by a space alien, until finally he decided that an android—a robot with humanoid features and the capacity for emotion—would write of his experience trying to pass as one of us.

“I’m always dealing with what makes us behave the way that we behave,” Kelman said recently by phone from West Hollywood, his current hometown. “I’m always focused on what makes us people instead of thinking machines.”

Kelman was midway through his studies at MIT when he realized that “once I started doing science I wasn’t sure that I had the patience for it.” Seeking a more fun way to think about artificial intelligence and the brain, he minored in film and media studies, then came to Brown to earn his MFA in fiction writing.

It was while at Brown that Kelman—after attending a party thrown by a high-tech entrepreneur and feeling both intrigued and repulsed by the man’s romance with a nineteen-year-old woman—wrote his first and best-known novel, girls. That book drew some criticism for its graphic accounts of male-female relations, but Kelman’s more recent projects—including a script he sold to director Steven Spielberg—have kept a focus on the mind, with fewer diversions to other bodily organs.

In How to Pass as Human, a sweet relationship develops between Android 0 (also known by the human name “Zach Tobor”) and an alluring human female named Andrea. The story is set in Las Vegas, where, Kelman noted, humans are “at their most id-driven and least rational.” Surprisingly, it toggles quickly and seamlessly between its android-meets-girl narrative (with doses of a thriller and a mystery) and its other key element—a detailed guide for future androids, with illustrations and slick graphics.

Indeed, it’s the guide’s naïve but dead-on instructions (on office cubicles: “Sayings or cartoons should be displayed that disparage work and the workplace in general, but not specifically your workplace”) that give How to Pass as Human its humanity. The book’s fun look is a tribute to the unusual choice of publisher, a division of Dark Horse Comics.

The book’s core lesson, as related by the author, applies equally to androids, to their mortal makers, and maybe even to Kelman’s own career: “If you have the potential to overcome your instincts and your programming, it’s a good idea to try to do that.”

Reader Responses to Overcome Your Programming