In the summer of 2014, Malika Kapur ’97, CNN’s Mumbai correspondent, got an assignment that was very close to her home in India’s commercial and financial capital. The producer asked Kapur to investigate a report about a local disabled and homeless boy whose grandmother tied him to a bus stop every day while she went to work. 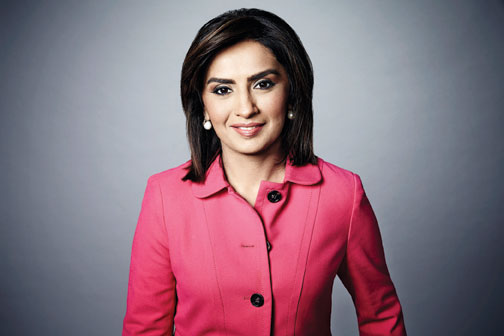 Kapur found 9-year-old Lakhan Kale and his elderly grandmother Sakubai in the alley where they slept. Lakhan is deaf and mute and has cerebral palsy. The strap the boy was tethered to each workday was made from rags and dangled from a bus-stop pole.

Most reporters, Kapur says, would probably have portrayed the grandmother as a villain for leaving the boy tied like that. But her nuanced reporting showed great empathy for Sakubai. “This is when I felt it was a huge advantage to be a local journalist,” Kapur says. “That really gave me the ability to understand where that grandmother was coming from. She was doing it to make him safe.”

Lakhan’s father was dead and his mother and older sister had abandoned him. The only government-run shelter for special-needs children was full. What else could the grandmother do? She feared he’d stumble into traffic or get lost while she made a meager living selling toys and knickknacks at the beach.

After the story aired, an outpouring of support for Lakhan flooded Kapur’s e-mail and social media accounts with offers to help. Subsequent segments tracked Lakhan’s progress. Within weeks, a father and son welcomed Lakhan and his grandmother into a home they run for deaf and mute children. They also gave his grandmother a job in their hostel.

Lakhan’s ordeal is a classic example of a human-interest story that enables reporters to illustrate a societal problem, in this case India’s scarcity of proper treatment for disabled people. “Even if I’m covering a business story on Indian GDP [gross domestic product] levels, I look for a human story,” Kapur says. “People watch human interest.”

Kapur has interviewed such business leaders as Howard Schultz, the chairman and CEO of Starbucks, and such Bollywood stars as Aamir Khan. She’s covered terrorist attacks—in fact, she’d just relocated to Mumbai when Pakistani terrorists killed 164 people over three days in November 2008.

The city was in such upheaval that CNN, without a local studio, created one in Kapur’s home, setting up cameras, lights, and other equipment to broadcast updates on the attack from her living room. Despite the carnage, Kapur was tireless in covering the story. “That’s what we [journalists] all thrive on,” she says.

That adrenaline rush is old and familiar, harking back to her days at the Brown Daily Herald. The scope of the stories is different, she says, but breaking stories unleashes the same chemical reaction. “It’s the same in Providence or London or India,” Kapur says. “You’ve got to meet that deadline, and everything else has to wait.”

Kapur is most proud of the stories exposing human trafficking she’s done for CNN’s Freedom Project. One memorable interview was with an 11-year-old girl who was beaten and held captive by a Bangladeshi cricket player and his wife, and who finally escaped with many broken bones. “It really stayed with me,” Kapur says. “I wonder how much of this is going on behind closed doors.”

A 15-year CNN veteran, she started in its London bureau after two years at CNBC. To get airtime on CNN, you had to compete with such heavyweight personalities as Christiane Amanpour. Kapur found opportunities by taking on undesirable shifts. For years she worked overnight, and when producers sought volunteers on the weekends, she’d raise her hand. “If you give, you get,” she says. “I did work hard, but it gave me the opportunity to be on air.”

Growing up in Calcutta, Kapur knew from an early age that she wanted to be a television journalist. When she was young, there was only one state-owned television station, which carried 23 minutes of news coverage in English. The events were often days old, because video often had to be hand-delivered. But then, in the early 1990s, India liberalized its economy, unleashing a cavalcade of news channels.

At the same time, the Gulf War gave those channels a compelling story to report. Kapur was transfixed by the grainy images showing missile attacks happening 2,000 miles away. “It was such a different way of viewing world events,” Kapur says. “It had such a profound impact on Indian society. I just knew that I wanted to be part of that.”

Reader Responses to The Human Angle