For Zadie Smith, the most memorable trend of the 1990s wasn’t grunge music or frosted-tipped hair. It was fame. 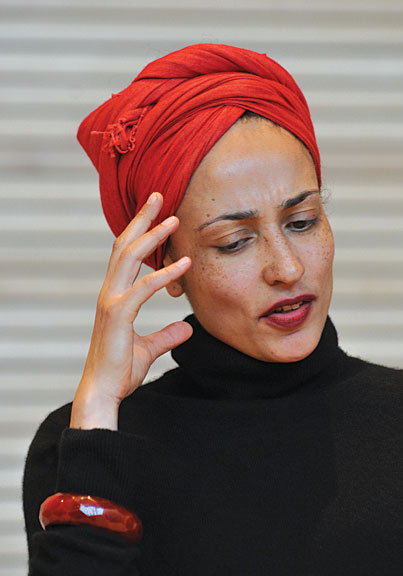 “People were utterly obsessed with fame,” she recalled during a reading on campus in April. “It was the big story. It got to the point that it distorted every other relation we had in the world.”

The irony of her statement was hard to miss. After all, Smith is an award-winning author of five novels and several collectons of short stories and essays, and her appearance was sponsored by the Africana studies and literary arts departments as part of Brown’s prestigious Writers on Writing series. The Martinos auditorium in the Granoff Center was packed full of people who had long before secured tickets to see her, waited in line, bought copies of her books, and were now staring at her in rapt and adoring silence.

For Smith, who grew up in a mixed-race household in a lower-income London neighborhood, it is a curious position to occupy. She remembered how, when she was young, there had been black and Asian theater workshops and mixed-race kids’ festivals—programs, she said, “for kids like me.” But after these programs were dismantled by “very white and corporate” powers, she realized something about the industry of fame: “It’s just the idea that attention somehow equals value.”

Take Justin Bieber, for example. Reading from a recent essay, Smith applied the theories of Martin Buber, a twentieth-century Jewish philosopher, to Bieber, the twenty-first century pop star who “came out with all those damn catchy songs you can never get out of your head.” According to Buber, we relate with other people at one of two levels: the brief and objectifying “I-it,” or at the deeper, more personal “I-thou.” According to Smith, Bieber’s fame keeps him at the “I-it” level, as simply a “love object” for his fans, and not a person.

Smith’s writing helps her handle her own fame.  “I’m not a mindful person. I always have to be doing something, and writing is my doing,” she said. “So the idea of having readers, expecting something of me? I try to block it out.”

After the reading, the line of people waiting for autographs ran all the way to the door.