Talk about basketball in Rhode Island, and it won’t take long for the name Bill Reynolds ’68 to come up. 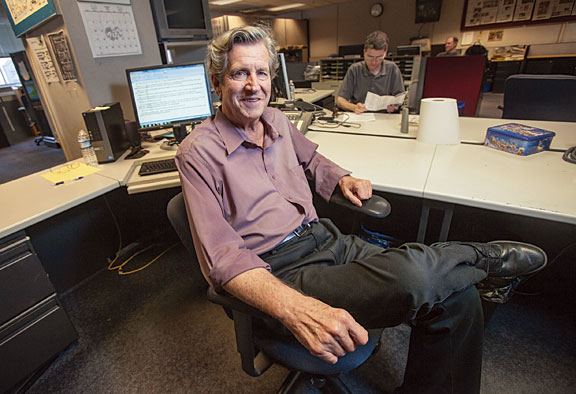 For thirty years Reynolds has written sports columns for the Providence Journal, and, although he’s covered just about every sport, he keeps coming back to basketball, the sport he’s loved since childhood, when he watched games in Marvel Gym. Basketball has also been the subject of most of his twelve books, including his latest, Hope: A School, a Team, a Dream.

“I lucked out getting into Brown,” Reynolds says. Besides studying English, he spent a lot of time on the basketball courts and was cocaptain of the 1967–68 team. Later he won a spot on the 1960s all-decade team and was inducted into the Brown Athletic Hall of Fame. He’s a third generation Brunonian, son of William D. Reynolds ’37 and grandson of William W. Reynolds ’07, who was captain of the 1906–07 basketball team.

After college, Reynolds taught English at nearby Barrington High School, but after three years he quit to write a novel, which didn’t quite pan out. In need of money, he took an adult education writing course and, he says, “that turned the light bulb on.” After freelancing for the Providence Journal, he was hired as a reporter there in 1981, and two years later he leaped at a sports opening, eventually becoming a columnist.

Fast forward to 2012. Even with all his experience with basketball and living on Providence’s East Side, Reynolds hadn’t been in the worn gym of Hope High School for fifty years when he decided to chronicle a season in the life of its basketball team. He hoped it would be a way to tell a story bigger than both the sport of basketball and the city of Providence. “You can’t be involved in basketball,” he says, “without dealing with the inner city.”

Hope High, an imposing yet decaying school, is only a few hundred yards from the Brown campus, but its culture couldn’t be more different. Hope students generally live elsewhere in Providence, in neighborhoods beset with poverty and violence. “They live a life that most people know nothing about,” Reynolds says, “and don’t want to know anything about.”

“In many ways, these kids are heroic,” Reynolds observes about Hope basketball players. He tells their stories in a direct way, showing how family, neighborhood, and other difficulties make it hard for them to survive on the basketball court and elsewhere. He relates compelling scenes of games and practices, weaving in the social and educational history of Providence along the way. He paints Hope’s longtime coach Dave Nyblom as a “tough love” taskmaster who’s really a huge-hearted counselor, routinely bringing food to practice for players who can’t afford to eat as well or as often as they should.

Reynolds has been as driven writing books as he was on the basketball court. He’s never taken time off from his job at the Journal to finish a book. He remains grateful to Brown for his start. “Brown put me around very smart people, and they raised my game,” Reynolds says. “Even by osmosis, I got smarter along the way.”

Reader Responses to Beyond the Court