Rufus Gifford ’96 arrived in Copenhagen in August 2013 as the newly installed U.S. ambassador to Denmark. He admits, with typical candor, “I didn’t know how to do the job.” It wasn’t a totally new scenario for a man who’d already tackled Hollywood in his twenties, abruptly switched to politics, and within a few years became the top political fund-raiser for President Barack Obama. 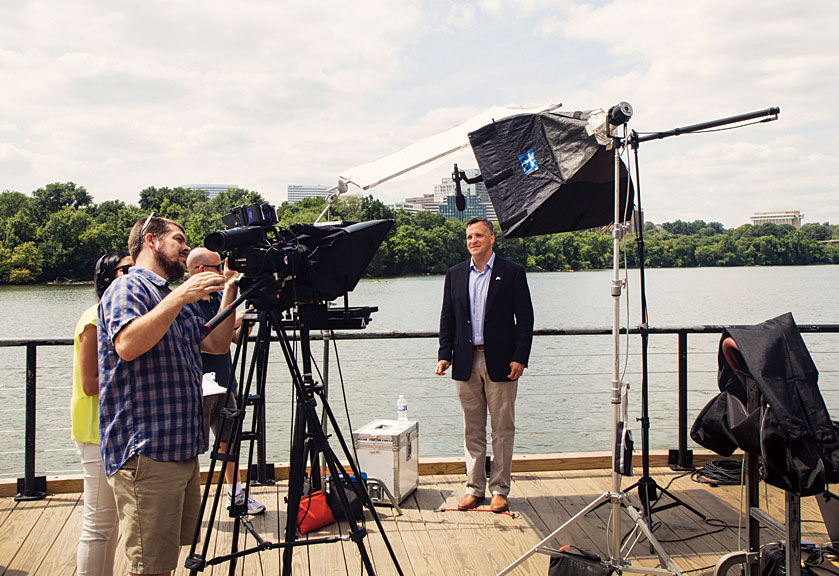 Although Gifford had been drilled on what his bosses back at the State Department expected, he didn’t know exactly what the people of Denmark wanted from the United States, or from him. He knew he wanted to counteract lingering distrust of U.S. policy, from the Middle East to gun violence at home. “I wanted to humanize the job,” Gifford said, “and tear down the walls.”

You won’t believe—as they like to say on social media, where Gifford has thousands of followers—what happened next.

When Gifford agreed to a Danish producer’s quirky, unsolicited request to film his new life for a TV documentary series—aka a reality show—he became not just an emissary to the Scandinavian nation but a bona fide celebrity. The Danish Broadcasting Corporation’s Jeg er ambassadøren fra Amerika, or The American Ambassador, was so successful that it earned Gifford that nation’s equivalent of an Emmy. The show got a boost at the end of its second (and most likely last) season with a fairy-tale ending: its star’s pomp-laden wedding last October to Cape Cod veterinarian Stephen DeVincent.

For Gifford, staging the ceremony at Copenhagen’s City Hall also made something of a political statement about progress in America, where as recently as 1997 Congress wouldn’t confirm a gay nominee for an ambassadorship. And it was a nod to Denmark, the first nation to legalize same-sex marriage in 1989: “A way of saying thank you,” Gifford says, “for paving the way from talk to action in the late 1980s.” 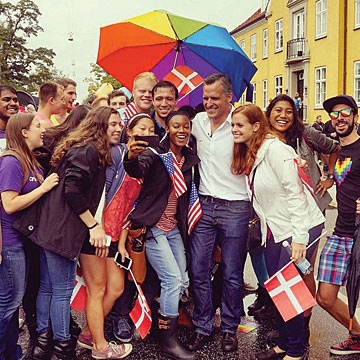 Andrew Juster Sheild
Life on camera for The American Ambassador.

Gifford credits the open and progressive atmosphere at Brown in the early 1990s with helping him overcome deep fears about coming out as a gay man. “Brown taught me to go out and do something bold, not necessarily what’s expected,” he recalls. After concentrating in theater arts and American Civilization, he headed west, where he took on studio work and produced such big-budget comedies as Dr. Dolittle 2 and Garfield. But Hollywood left him unsatisfied, so he called Alexandra Kerry ’02, asking if he could volunteer for the 2004 presidential campaign of her dad, John Kerry.

He turned out to be good at fund-raising. A chance encounter on Capitol Hill with Barack Obama in 2007 convinced him to become an early ally. After the turmoil of the George W. Bush years, he said, “I wanted to prove the time had arrived when we could elect a black man with the middle name Hussein as president.” In 2012, he became finance director for Obama’s reelection.

What’s the next act for this Hollywood refugee and newlywed now that Obama’s presidency is ending and his time in Denmark is running down? “The answer is I just don’t know yet,” he says. “I’ll be forty-two when I leave here, and I will start over. A lot of people look at that as scary; I view it as exciting.”