On March 13 at the Lower East Side studios of Paul Taylor’s American Modern Dance in New York, a diverse group of Rhode Island–based dancers led by Brown Dance Director Julie Adams Strandberg demonstrated that dance can be studied both intellectually and kinesthetically, and that anyone, young or old or physically challenged, can be part of that inquiry. 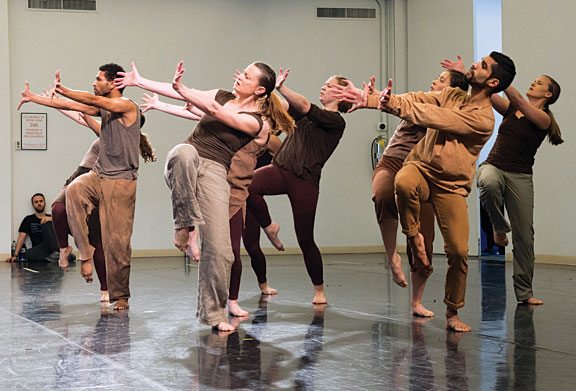 Lucia Lopez
Professional and student dancers perform a crystalized version of a famous modern dance from 1959.

Strandberg is on a mission to capture historically significant dances, and to study and teach them with rigor. She’s up against some hard realities: Dance is ephemeral—once a piece is performed, it’s gone. There’s no libretto, as in opera; no text, as with a play. And to some degree, that’s the way the choreographers want it. Dances may be licensed for performances, but what if they’re performed poorly? The dance companies that typically own the rights are often reluctant to cede that degree of creative control.

Despite such resistance, Strandberg, who founded Brown’s dance program in 1969, and her sister Carolyn Adams, a former principal dancer with Paul Taylor, founded the American Dance Legacy Initiative (ADLI) in 1993, to preserve and study great American dance. They believe dance has the potential to provide all people, not just dancers, with a “kinesthetic and historical knowledge and understanding of the evolving American culture,” as they put it.

To make preserving dance possible, the sisters came up with the idea of commissioning well-known choreographers to create what they call Repertory Etudes, short dances that are based on the artists’ signature works. Dancers are able to study and perform key elements of master dance works in a way that was previously not possible.

In New York, members of Dancing Legacy taught a repertory etude of “Rainbow ’Round My Shoulder,” a 1959 masterwork by seminal American choreographer Donald McKayle. The Rainbow Etude workshop, which was open to the public, was in advance of a full professional performance of the dance at Lincoln Center later in the month. During the workshop, the teenage students from Central Falls, Rhode Island, who study dance through a partnership with ADLI and Brown, were joined by dancers in their eighties, Brown dance students, Brown alumni who first learned the Rainbow Etude decades ago, and professional dancers.

At the same time, Rachel Balaban ’80, an adjunct lecturer at Brown and regional coordinator of Dance for PD, led a class on the etude for people with Parkinson’s disease. Strandberg collaborates with Balaban in adapting dance for people with Parkinson’s disease and autism. In a field where a young child can be discouraged from continuing in ballet for being the “wrong” shape, size, or color, Strandberg stresses the importance of “providing everybody with access to the actual dance works.”

The Rainbow Etude workshop surpassed everyone’s expectations, Strandberg said. “You look at these people that are sharing an embodied experience with each other,” she said. “People were connected by their common knowledge and their memories. That’s a part of these particular demonstrations that’s really powerful.”