On a typical work day, instead of shuffling into a cubicle and sitting in front of a computer, Emily Biss Wilson ’96 grabs the controls of a commercial jumbo jet and sends it through maneuvers that are straight out of an action movie script. She’ll gun it at high speeds to make sure warning lights activate, or shut down the engines and restart them in midair. “That’s something you would never do with passengers in flight,” says Biss Wilson, a test pilot for Boeing. “We are operating the aircraft very differently than an airline pilot would do,” she says. “I have the coolest quality assurance job in the world.” 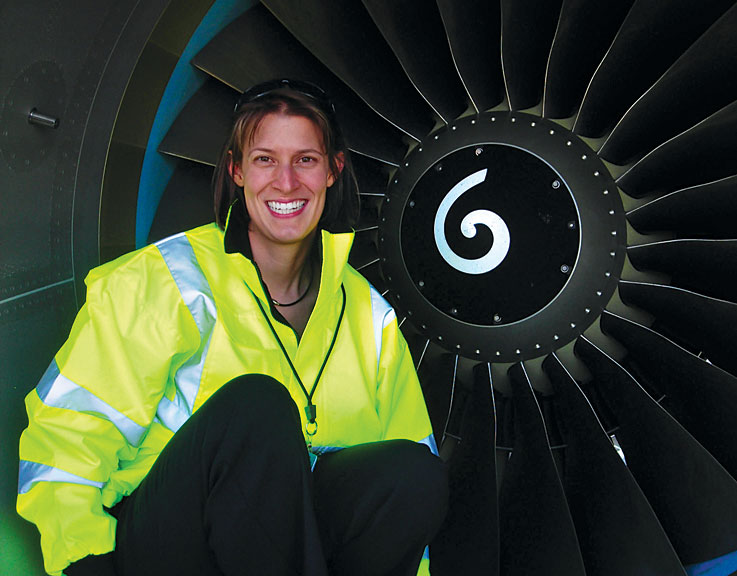 Every commercial airplane manufactured by Boeing gets tested by a pilot like Biss Wilson before it’s delivered to the airline that ordered it. Almost always, the maiden voyage is a smooth one. But occasionally something goes wrong.

Once, Biss Wilson was running a new plane through the standard battery of tests thousands of feet above the ground in Washington State when the navigation system malfunctioned. The machine started spitting out confusing air-speed readings, making it difficult to control the aircraft. Biss Wilson aborted the flight, after consulting with the copilot, systems operator, and flight analyst, who are on board for every test. “I have had some experiences that have been hair-raising,” Biss Wilson says. On those rare occasions that something goes awry, the team writes up a squawk—a report describing the discrepancies—and the engineers figure out the cause of the mishap.

Biss Wilson flies planes most air travelers would recognize—Boeing’s 737, 787, and 777, which pilots term a “triple seven.” The series of tests, called a flight test profile, lasts for five hours on the ground and in the air. Even though there’s rarely a surprise, it’s hardly a routine flight, since her job is to check the plane’s performance under extreme conditions.

Biss Wilson has been flying ever since her sophomore year at Brown. She earned her wings during an exchange program with the University of North Dakota’s flight school. The path made perfect sense to someone who grew up dreaming about becoming an astronaut. Biss Wilson said that she watched The Right Stuff—a film about military pilots who became the nation’s first astronauts—so many times as a kid that she memorized every line. One of her childhood heroes was Jacqueline Cochran, a pioneering female aviator.

After concentrating in mechanical engineering and American civilization, Biss Wilson became an engineer at Lockheed Martin, where she worked for four years. She then flew commercial planes with a regional airline in the Pacific Northwest before signing up with Boeing.

In her downtime, Biss Wilson is an avid hiker of the Cascades and Olympic Mountain ranges. “One of my favorite things about flying is that I get to look at all the places I’ve hiked.”

Fewer than 7 percent of American pilots are women, according to the latest available FAA data. Biss Wilson barely notices—she got used to a gender imbalance as an undergrad in the engineering department. “I feel like I have had fairly minimal direct discrimination,” she says. However, one aspect of her job makes it tough to completely forget how uncommon it is to see a woman at the cockpit controls.

After a Boeing jet passes its tests, the purchasing airline may send one of its pilots to ride along for a demonstration. Often, the customers are from Middle Eastern countries, such as Saudi Arabia, where women rarely even drive cars. “They’re quite often shocked when I introduce myself as the captain,” Biss Wilson says. “But then we go do pilot stuff, and there’s no time for them to be shocked anymore.”