Christina Mata started thinking about college back in preschool. Growing up in the small city of Edinburg, Texas, Mata attended an alternative preschool on the same campus where her mother was finishing a social work degree while supporting two children. Mata finished second grade the same year her mother graduated. Even then, Mata could feel how extraordinary finishing college was for her whole family. 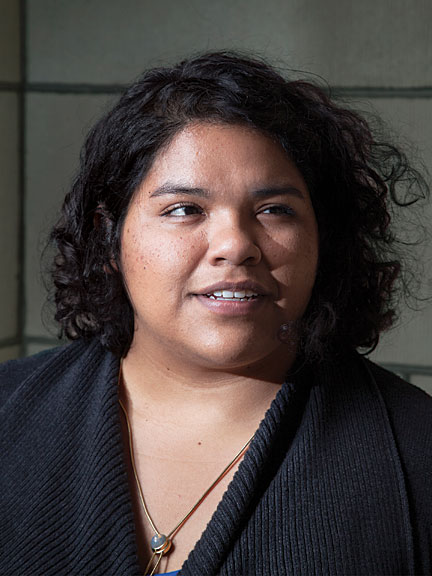 When it was time for her to choose her own college, Mata earned a Gates Millennium Scholarship, which is aimed at helping minority undergraduates who have shown academic excellence and strong leadership skills. Four students in the class before hers had gone to Brown, so Mata had heard a lot about it. Although she’d never left Texas, Brown went right to the top of her list. She was particularly drawn by the idea, embodied in the eight-year Program in Liberal Medical Education (PLME), of getting a broad education as a precursor to medical school. “I’ve always been inclined to help people,” she says.

The summer before senior year in high school, Mata, who is Mexican-American, finally left Texas. She went to MIT for the Minority Introduction to Engineering and Science (MITES) program. There she fell more deeply in love with science. After she was admitted to Brown, she visited campus and became convinced the University was for her. “This was somewhere I could step closer to who I wanted to be.”

Mata became fascinated with Italian language and culture. After hearing about Brown’s study program in Bologna, she applied, but the prospect of living in Europe frightened her. “I was already so far from home,” she says. It made all the difference when a valued teacher, then–graduate student Karina Mascorro ’12 AM, ’15 PhD, both supported and pushed her, saying, “If you’re not scared, how are you going to grow?”

Mata got a rocky start in Bologna. “I was not the classic study-abroad American,” she says. “It was hard to find my place.” In time, she says, “I learned how to take more risks, and in those risks I made lasting friendships.” She was captivated by courses on Italian film, literature, and history, all the while studying medicine and shadowing Italian doctors.

For the past three summers, Mata has returned to MITES as a teaching assistant, even mentoring minority students who have succeeded her at Brown. Now that she is halfway through her PLME commitment, however, her primary goal is to focus on becoming a family physician in a community clinic. But before she begins full-time study at the Warren Alpert Medical School, she will spend two years with Teach for America as a high school math instructor in the Rio Grande Valley.

“I’ve learned so much at Brown,” Mata says. “I want to give that back to my community.”

Reader Responses to Finding My Place