Born in a small English village, Sophie Purdom moved to Acton, Massachusetts, as a young girl. Her first business experience was helping out with her family’s e-commerce health supplements company. In high school, she helped start Power Down which promoted the school’s energy conservation efforts. With the money saved from increased energy efficiency, the school was able to hire two additional teachers. After this early success, Purdom arrived at Brown fired up to study environmental science. 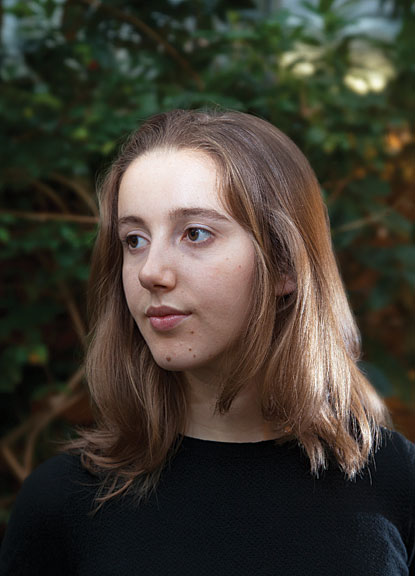 She threw herself into public policy, working for Providence’s Office of Sustainability on a sustainability plan for the city and an urban agricultural program. As part of Brown’s Climate and Development Lab (CDL), a think-tank run by Timmons Roberts, a professor of environmental studies and sociology, she went to United Nations climate negotiations in both Warsaw, Poland, and Lima, Peru. There she realized that working with business leaders was the best way to effect change.

So, she says, instead of running around talking about “moral issues and incorporating a carbon tax just because it’s the right thing to do,” she was “bugging the oil and gas executives about carbon asset risk and fiduciary duty.” Business leaders, she believes, have to address the risks of warming temperatures and rising seas because corporations have a fiduciary duty to deliver shareholder returns.

“Couching climate change in terms of economic and business risks is a pretty new field,” she says, “and for me it tied everything together.”

Now, as she heads off to her new job at the Boston-based management consulting firm Bain & Company, Purdom hopes to combine environmentalism and finance. “I think we’re at this pivot point where the tension between these two worlds is starting to break down and is becoming a point of collaboration,” she says, “where finance realizes it needs sustainability and sustainability realizes it needs finance.

“I don’t think there are many points in history where you realize you’re on the edge of something dramatically new—and I’m convinced that we’re there.”

The philosopher of science, Karl Popper, said that real science makes every effort to disprove accepted theories. For the most part, man-made climate change has benefited from few alternative hypotheses, perhaps due to the enormous (many billions of dollars...follow the money) invested by the government into researchers bent on maintaining the status quo of climate science. Thankfully the ‘deniers’ receive a relative pittance to put forth and study contrary hypotheses, thereby keeping science alive.

All most of us know about nuclear power is based on 50-year-old technology. (What was your phone like 50 years ago?)

As a Canadian, it is concerning to note the amount of funding anti-pipeline and anti-oil sands organizations receive, while not a murmur of complaint is launched at the alternative movement of oil by (proven unsafe) rail all over North America, or the large volumes of oil that are imported into eastern Canada by sea from Saudi Arabia and other foreign sources. We cannot stop all oil distribution from Canadian wells or mines instantaneously—what would happen would be greater importation of substitute oil from much less clean/green sources to fulfill U.S and Canadian demand. Canada is a far better oil source, and its transportation is by far safer pipelines, than any alternatives proposed. We all want to end fossil fuel dependency, but in sensible, economically effective ways.

The world is 78% water, that is where we should be concentrating our research. The best study on climate has been done in Antarctica with ice borings. We can learn a lot regarding the changing climate over thousands of years. Climate does change. We call it winter, spring, summer, and fall.

We are in the third interglacial phase of the Quartenary Ice Age. Ice ages last 3 million years.  This one is 2.6 million years old. This is what is predicted:

The climatological changes we notice are caused by low cloud cover causing uneven heating and are driven by the wobbling of Earth’s spin axis changing where the storms form. Our large cities have generated so much pollution that they have created local micro climates. Some of them may become uninhabitable in the current century. Addressing urban pollution requires cooperation, effort, and modest financial investment. It should not be sidelined by diversion of resources to economically crippling and useless efforts at “capping carbon.” It is difficult to speak in a verbal cyclone, but someone should. Why couldn’t it be Brown?

Climate change denial is a distraction. The important discussion is what should we do about it. The answer is local nuclear power plants. All most of us know about nuclear power is based on 50-year-old technology. (What was your phone like 50 years ago?) It is time to inform ourselves about current nuclear potential.

Sadly, the freedoms of capitalism and democracy allow individuals and institutions to speak with their money to lobby politicians towards their way of thinking. Unless we outlaw lobbying, we're left with good sense vs. monetary influence. It doesn’t mean that the logical, science-based solutions won't prevail, just that they will be delayed. It’s tough for many people to deal with change, easier to stick with what they know and ignore the consequences, even if it's killing them (i.e. vaccines).

Thanks for covering the important work of the Urban Environmental Lab in exposing the influence of money in our politics, policies, and even understanding of what’s real. We are moving from a majority to a supermajority that support campaign finance and lobbying reform that would go a long way toward restoring government ‘of, by, and for’ the people. Only a Constitutional amendment can undo the damage done by successive Supreme Court rulings, including Citizens United. I urge you all to find a local effort to advance such an amendment and get involved.

A response to “Follow the Money,” (Courses of Study, April-May ’21). The students and their professors have assumed that all readers know what climate change denial really means. It was never defined. They would be hard-pressed to find corporate “deniers” who would deny that after over 200 years and a 50% increase in atmospheric carbon dioxide, the Earth’s average temperature anomaly has risen just a fractional amount, less than one degree C. Or that sea level has risen less than a foot. Hardly compelling evidence for a climate crisis or emergency worthy of a denial. The opposite of climate denial is climate acceptance of dire model forecasts with urgent efforts to keep the Earth’s temperature stable. Those global warming goals of zero emissions and Net-zero CO2 drawdowns from the atmosphere of more than just a few parts-per-million. Skepticism is warranted for significant carbon capture and geological storage because just one ppm of CO2 would require the permanent storage of over 7,500 million metric tons (CDIAC). Such a huge amount is beyond the capability of human technology. This huge quantitative barrier to climate mitigation should be acknowledged in any concerns about reversing climate denial movements to achieve the Paris Accord goals.