Growing up a sports star in Norwood, Massachusetts, Joe Sharkey was in love with basketball and thrilled to be playing at Brown, where he studied economics to prepare for a career in sports management. He was living his dream. 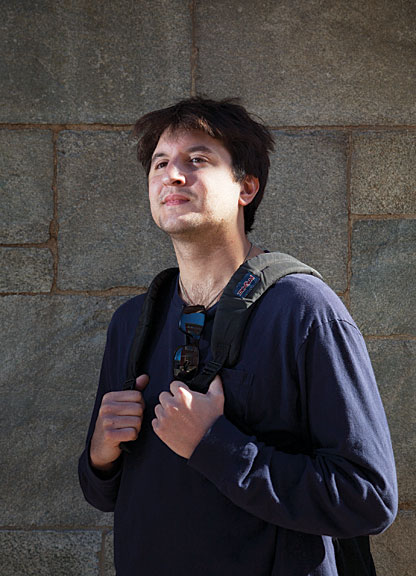 Then in the early morning of May 12, 2013, Sharkey was with friends on Thayer Street when a fight started. Sharkey, who wasn’t involved, was punched so hard that his skull shattered.

He spent several weeks at Rhode Island Hospital—including two in a coma. Then he went to Spaulding Rehabilitation Hospital in Boston for five more weeks. He needed to relearn how to eat, drink, talk, and walk.

Sharkey also had to let go of basketball—a big part of his identity. He returned to Brown later that year, taking one course in the fall and another in the spring. Doctors had earlier told his parents not to expect Sharkey ever to go back to school, and cautioned him about going back too soon.

“I was in a complete fog,” Sharkey recalls, but he pushed through. Then, in May 2014, he was able to join the annual alumni basketball game at his high school, Northfield Mount Hermon. And he didn’t just play. He starred. Knowing his story, the crowd exploded when he sank the first shot of the game.

At Brown, his coaches and teammates invited him to become a non-playing member. He was listed in the program, and went to games and practices. The team honored him at the last home game of his senior year. Fans gave Sharkey a standing ovation as he walked to center court with his parents.

Over the course of his long rehabilitation, Sharkey realized that he didn’t love economics and that he was passionate about philosophy. He switched concentrations. “People thought I was crazy,” he says. Despite his change in major, Sharkey still hopes to work for the Boston Celtics. Meanwhile, he takes time to return to Spaulding as a peer mentor. “It’s where I got my life back,” he explains, “so I love it there.”

He also began speaking out about brain injuries, first to nursing students at Northeastern, and then to undergraduates studying traumatic brain injuries at Harvard. The experience has fueled an ambition to keep educating others.

After his injury, Sharkey wanted his attacker, Tory Lussier, “to go to jail for a long time.” But by the time Lussier was sentenced last December, Sharkey had come to agree with the judge’s sentence of seven years of probation, intensive psychological treatment, and 1,000 hours of community service, preferably connected to brain injuries. “It gives him a chance to be a real person instead of a monster,” Sharkey says.

Lussier apologized to Sharkey’s parents in the courtroom when he was sentenced and has written to Sharkey to apologize. “Show me you’re taking it seriously,” Sharkey says he wrote back. “A lot of people want to help you.”