The Snap of Ginger

At first glance Nico Enriquez and Max Easton seem mismatched as friends, never mind business partners. Born in Mexico City and raised around Boston, Enriquez, with his surfer-dude blond hair, gets around campus on a longboard. Easton, with short, tame black hair, hails from London and appears to be more buttoned up. 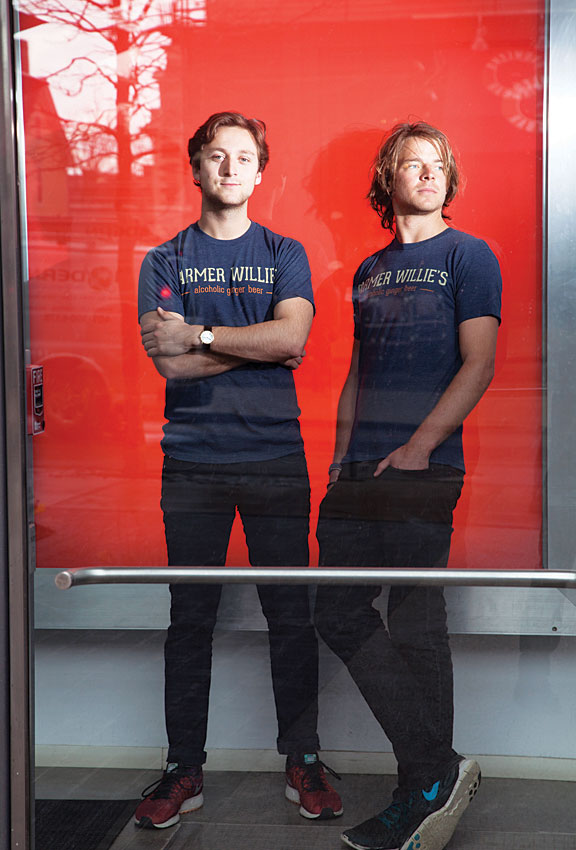 But after meeting during their first year at Brown, the two discovered a shared dream of starting a business. A year later, they brainstormed. Easton suggested an app that tells you how crowded a nightclub is at a given time. He laughs about it now, not sure why he ever thought it was a good idea.

Meanwhile, Enriquez shared an idea he’d gotten at a beach volleyball game on Cape Cod. Enriquez befriended the woman who put up the nets and learned that her brother was a goat farmer whose passion was brewing alcoholic ginger beer. Enriquez saw the brew as a possible craft beer alternative.

“I had always wanted to build something as an entrepreneur,” Enriquez says, “but I had no ability at all to organize.” Easton, whose mind was better tailored for organizing, also saw the possibilities and was soon all in on what became Farmer Willie’s Alcoholic Ginger Beer.

The next day, on a train to New York City, Enriquez read an e-mail advertising a Brown entrepreneurship fellowship. The deadline was that day, so he hammered out the application on the train. Enriquez and Easton won the fellowship and used the $1,000 to do research and development. Then they used a $5,000 Brown summer fellowship to incorporate the company and build a website.

They worked six or seven days a week developing their alcoholic ginger beer, meeting with potential investors and people in the beverage industry. Meanwhile, they kept up with their academics, Easton in political science and Enriquez in cognitive neuroscience. With help from engineering faculty members Barrett Hazeltine and Danny Warshay, they completed a series of independent study courses related to developing Farmer Willie’s.

The company, with its “Ginger with Soul” slogan, took off last summer. Their work has been extremely hands-on, including grinding hundreds of pounds of ginger. They also attracted their first celebrity endorsement when, at a charity golf tournament on Cape Cod, actor Bill Murray sampled it and proclaimed, “This is the best alcoholic ginger beer I’ve ever found.”

As sales grew, so did the need for capital. As of this spring, they have raised $800,000, and one investor is none other than Tom Scott ’89, cofounder of Nantucket Nectars.

“Brown allowed us to do Farmer Willie’s,” Enriquez says. It’s been an integral part of their Brown education, the two say, not something apart.

Reader Responses to The Snap of Ginger