A childhood memory stands out for Yaya DaCosta ’04: the day she raced home proudly after school to show her parents a 95 on a math test. But instead of dishing out praise, her father asked what happened to the other five points. “It broke my heart, but I got it,” she says. “I realized I came into this family for a reason. I’m going to learn what hard work means. I’m going to learn what excellence is.” 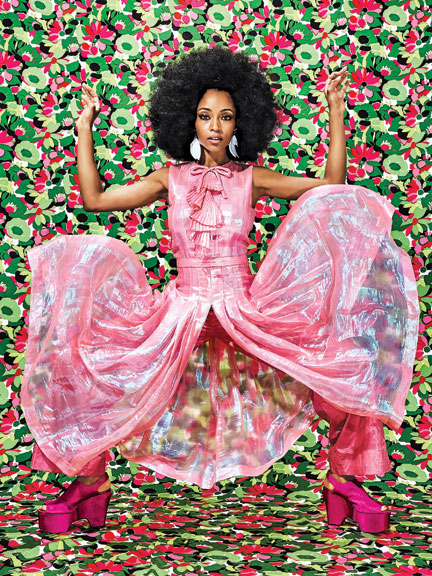 Now DaCosta is applying that work ethic to her role as ER nurse April Sexton on NBC’s Chicago Med, a spin-off of the successful Chicago Fire, where her character first popped up as a friend of Lt. Kelly Severide. It’s DaCosta’s first gig as a full-time cast member on a TV series, and she admits that joining a program from legendary producer Dick Wolf, creator of the Law & Order franchises, was daunting at first. So DaCosta and her costars take their roles seriously, taking time before filming began to shadow real-life hospital physicians who handle everything from heart attacks to gunshots.

“It was great preparation for me,” she says, “not just in learning the medical jargon and technicalities, but also watching these people who go to work and deal with life and death every day.”

Raised in New York City, DaCosta landed her first acting job at age eleven in an educational film. She earned a scholarship to Brown, where she concentrated in international relations and Africana studies. After modeling to cover expenses during her junior year abroad in Brazil, she was encouraged by a classmate to audition for America’s Next Top Model. She began shooting the third season of the reality show the day after graduation, driving to the airport in her cap and gown. Although DaCosta garnered a loyal fan base and placed second in the competition, she also experienced the negative side of fame. “It was before Instagram and Twitter,” she says, “but there was definitely a culture of anonymity on the Internet where people were able to say whatever they wanted about you.”

After that, DaCosta refocused on acting, finding theater work and supporting parts in such films as the Oscar-nominated The Kids Are All Right and the television shows Ugly Betty and All My Children. Her big-screen break came as a student activist in Lee Daniels’ The Butler, acting opposite heavyweights Forest Whitaker and Oprah Winfrey. “Even when I wasn’t working, I would go to the set and just observe,” she says. She next scored the lead in Lifetime’s controversial Whitney Houston biopic, which drew sharp criticism from Houston’s family. DaCosta, however, tried to focus simply on honoring the musical icon. “I spent sleepless nights doing research on YouTube and reading lots of articles,” she says.

Next up for the actress is a film about New Orleans jazz pioneer Buddy Bolden. She’s also looking forward to resuming production on Chicago Med, which returns this fall. “There’s still no relaxing,” DaCosta says. “A lot of shows have a nice first season, but the second season is where we really get to prove ourselves. We have to be even better.”

Reader Responses to Getting Even Better