Students have been getting advanced degrees from Brown in more categories than ever before, thanks to the University’s five-year-old School of Professional Studies (SPS). You can get an executive MBA, as well as degrees in such focused topics as cybersecurity, health-care leadership, and, starting in 2017, science and technology leadership. 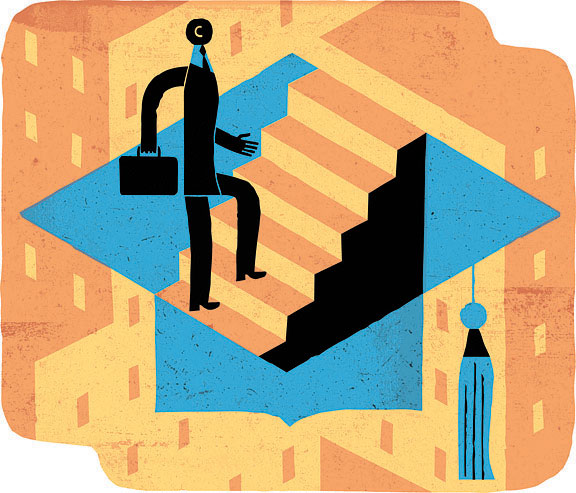 What are these degrees, exactly? And are they academically on a par with more traditional master’s degrees, or are they a way of capturing funds from companies and mid-career executives willing to pay dearly for professional development?

According to Vice President for Strategic Initiatives Karen Sibley ’81 MAT, who is also the SPS dean, “There are people who would say, ‘Oh, the executive MBA, that’s where you open your passport, get the stamp, have a few drinks, and go home again, while the real MBA is when you sit in the classroom and you really learn the stuff.’” She’s exaggerating a little, she admits, but business executives do wonder what grad school can actually teach them about, say, finance.

If anything, Sibley says, “I would say an executive master’s is more challenging than the traditional degree program because it’s set at a level where there’s an expectation of prior knowledge. And it is made even more rigorous by the peer environment they’re put into.” Many of the people in the executive master’s programs, she points out, already have advanced degrees, from JDs to MDs.

David De Simone ’89 was a lawyer for a health-care system in New Jersey when he realized he needed to do something to position himself as a leader. He was often a key player in sensitive C-suite meetings at his firm, but he couldn’t crack the inner circle: “It was like, ‘Thank you, lawyer, for your advice, but now the big boys and girls will be making the decision.’”

His company did offer help with master’s degrees, though Brown’s executive master’s in health-care leadership was a new concept. “I had to educate my employer about it,” he says, “the hybrid of on-campus and online, and the fact that it was sixteen months and I would be solving problems related to the company.”

In Brown’s executive master’s programs, students work on a “critical challenge” project, in which they identify a problem in their industry and work to find solutions. “You don’t get graded on whether or not you implement [the solution],” Sibley explains. “But most students end up implementing some form of the project.” This aspect helped De Simone, who earned his executive master’s in 2015, to persuade his company to support his candidacy. “It’s almost like they’re getting a consultant,” he says. Because students continue working while they pursue their degree, they can apply what they learn right away.

“Learning theory will tell you that about seven minutes is max for anybody to sit and listen to a lecture,” Sibley says. Professors who teach at SPS benefit by learning how to integrate state-of-the-art online learning techniques into their undergraduate courses. Then, perhaps most crucially, there are professor-led online discussions with the other students, many of them smart, seasoned professionals located all around the world, and group projects using e-mail and Skype. For students like De Simone, that process was a big part of the education, pushing his digital communication skills to a level that might even have been above those of his then-ten-year-old son: “I was having group chats at midnight with people using Google Hangouts and uploading videos, spreadsheets, and PowerPoint documents.” When he got back to the office, he says, the IT department was duly impressed.

Peer-to-peer education is a big part of the program: “You’re surrounded by bright professionals with directly relevant experiences,” Sibley says. For Ivon Rodriguez ’00, who completed an executive MBA this spring, a major benefit was the experience—informed by the program’s ethnography curriculum—of learning how to work collaboratively with an extremely diverse group of colleagues. Or, as she put it, “How to finish a project with five individuals, not all native English speakers, with five countries of origin, with different time zones.”

Rodriguez had been thinking about an MBA for years, first a traditional one and then, as she gained real-world experience, an executive master’s. She finally chose Brown because its MBA curriculum is multidisciplinary, mixing the humanities with the business-school core, and takes a “strong entrepreneurial approach,” she says. “Most of the programs I was looking at seemed like the typical cookie-cutter MBAs. There was not that humanities focus, which I realize, thirteen years into my career, is so necessary to being a good manager.”

Since the program requires at least twenty hours a week, balancing school, work, and family can be a challenge. “My twins were two and my son was four when I started the program,” Rodriguez says. “I honestly did not know how I was gonna do it, I’m not gonna lie.”

She’d leave work, carve out family time, and start studying after the kids were in bed. “I think my teammates thought I was joking when I e-mailed them at 2:30 am.”