Music for the Angels

This summer, Brown music faculty enjoyed a rare honor: a chance to perform and debut works at Notre-Dame de Paris. On July 2, not only did Mark Steinbach, the University’s organist and curator of instruments, play the cathedral’s “great organ,” he premiered compositions by assistant music professors Eric Nathan and Lu Wang. It was, Steinbach says, “a magical experience.” 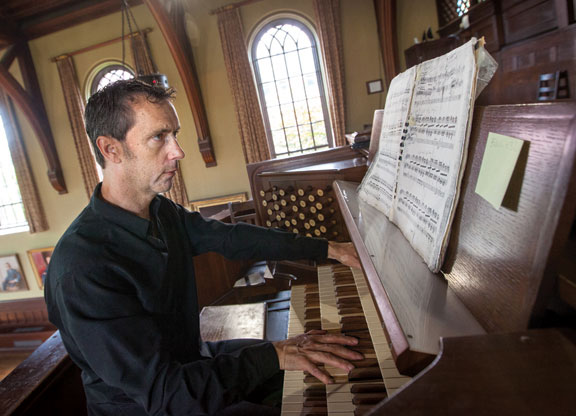 Mark Steinbach, here at the organ in Sayles Hall, was thrilled to play in Paris on the pipes that date back to the Middle Ages.

Visiting musicians at Notre Dame are selected by the cathedral’s tenured organists through a competition, and performances may be scheduled several years in advance. One of the greatest challenges is learning the idiosyncrasies of the cathedral’s instrument. Organs, especially historic ones, are not standardized, Steinbach explains, and the number of keyboards and stops varies widely.

Large and complicated, Notre-Dame’s great organ features five keyboards and 8,000 pipes, some dating back to the 1400s. Making the building’s soaring space feel more homey in June was an audience containing Brown faculty and alumni, including a group from the Brown Club in France as well as Nathan and Wang.

“The organ, like the cathedral itself,” Steinbach says, “contains many layers of history.” He notes that the instrument was played by twentieth-century modernist French composer Olivier Messiaen, as well as by César-Auguste Franck, the nineteenth-century French-Belgian composer whom Steinbach describes as “the granddaddy of French romantic music.” Steinbach played these composers’ pieces to open and close his performance.

“Performing works of Messiaen and Franck on a pipe organ which both had played was amazing,” Steinbach says. He also played Philip Glass’s “Mad Rush,” a piece he said works well in the cathedral’s large space, and premiered Nathan’s “Immeasurable” and Wang’s “Missing Absence,” which he commissioned for the Notre-Dame concert and played again at a number of venues in Germany throughout July. Nathan dedicated his composition “to Paris and its people, in the aftermath of the terrorist attacks of 2015.”

Reader Responses to Music for the Angels